Automatron is a holotape game in the Fallout 4 add-on Automatron.

It was published by Planned Diversion Programming in 2071.[1]

The holotape is located in the Rust Devil gaming terminal in the Fort Hagen hangar. After picking up Jezebel in the quest Headhunting, head to the left. Follow the path with torches and head in through the opening to the right. Head into the next room, head right then left and then to the right again where the terminal is.

With the Arcade Workshop pack, multiple copies of the holotape can be obtained by building and scrapping an arcade machine for Automatron. 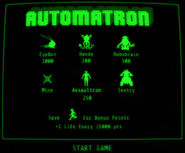