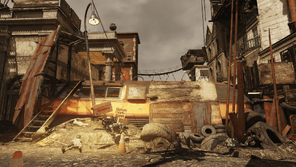 The fortified downtown of Beckley

The automation riots were the culmination of decades of disenfranchisement and exploitation of workers throughout the United States of America. The rabid development of advanced robotic systems would facilitate a massive wave of technological unemployment, with labor intensive jobs such as mining were the primary means of and manufacturing. Examples of extreme forms of the mass automation of jobs would take form in the city of Watoga where virtually all jobs were given to robotic servants.

As the Sino-American War dragged on, the state of total war turned the United States into a mockery of democracy. Victory was everything and the military-industrial complex was given free rein as to the methods of achieving that goal. In Appalachia, this took the form of ruthless exploitation of resources and people. Vault-Tec effectively privatized Morgantown after taking over its community college and rebranding it Vault-Tec University. Grafton Steel turned the northern end of the Forest into the Toxic Valley. Hornwright Industrial Mining Company turned Mount Blair and its environs into the Ash Heap using the Rockhound from 2070 onwards, then set the abandoned mines on fire to extract trace amounts of minerals from the smoke using ash forges, repurposed air scrubbers given to the company by the Clear Skies Alliance and then transformed into ore aerosolizing/collection devices.[2] An old ghost town was demolished to make way for Watoga, the "City of the Future,"[3] while AMS tore through the Cranberry Bog with underground nuclear tests to create ultracite.[4][5]

Against this backdrop of mindless greed and devastation, the common man suffered. As early as 2061, the region was rife with homeless, itinerant workers in the region struggling to make ends meet or provide for their families.[6] Many of them lost their jobs to rapid automation implemented by the corporations to improve their bottom line. Many of the affected workers were miners. RobCo was key in this scheme: Its wide range of robots was ostensibly meant to replace human workers in jobs deemed too dangerous, but many people in Appalachia rightly saw them as a threat to their jobs. First, they replaced miners.[7][8] Then construction workers. Then policemen and soldiers.[9] Eventually, they even came for service workers. What was supposed to be a boon for everyone turned out to be a benefit for the few.[10][11] Of course, not everyone was fully against the automation initiative, with the Pioneer Scouts utilizing Protectrons and Mr. Handies as scout leaders after their human counterparts were put out of commission by a few incidents.

The frenzied campaign of automation culminated with Ballot Measure 6. Set for a vote in November, the measure would issue a $2.6 billion bond to begin the process of replacing all human workers in the Appalachian government with automated systems, with the goal of complete automation by 2087. Among many in the region, it became an overt example of the proxy war between local workers and the conglomerates such as the aforementioned Hornwright Industrial and Atomic Mining Services, driving the shift away from traditional labor. Among the many opponents of the measure, Senator Sam Blackwell was the most notable, advocating against what he described as a "slow-moving disaster" that would leave the people with nothing but pink slips and empty bellies.[12]

The unrest peaked when AMS forced families out of the town of Welch in early October 2077.[13] The initial resistance was against the AMS' corporate agents sent to evict the families of Welch, which had the element of surprise on the side of the workers and citizens allowing them to easily gain the upper hand.[14] The disenfranchised workers of Appalachia organized themselves rapidly, setting up roadblocks and shutting down roads and factories across the western reaches of West Virginia, coordinating their efforts out of Striker Row, a staging area in the remote areas of the southern Ash Heap.[15]

Despite initial successes, the miners were not equipped for dealing with the National Guard and corporate enforcers, especially when the Hornwright-funded fleet of Strikebreaker robots, customized by RobCo Industries, arrived in the Ash Heap, using lethal force to contain and eliminate the workers.[16]

The home of the millionaires plaguing Appalachia, Bramwell was home to some of the most disastrous riots, with some of the miners successfully bringing down an unfinished Mega Mansion with mining explosives and attacking executives leaving for work from their fortified mansions.[17]

One of the historical centers of industry in Appalachia, Beckley was turned into a fortress by the protesters and acted as a base from which to launch raids on corporate facilities along the southern edge of Mount Blair. The National Guard attempted to force the barricades by ramming armored personnel carriers into them and dispersing HalluciGen's riot gas, leading to bitter street fighting. The workers were smart enough to board up buildings and establish their base on the rooftops of the town, including an infirmary.[18]

Despite the bloody fighting elsewhere, the rioting in Charleston was limited, due to a heavy presence of military bots, especially outside the headquarters of Hornwright Industrial Headquarters.[17]

A separate facet of the riots took place at Poseidon Energy Plant WV-06, a coal power plant originally built in the 1970s to provide power for the western parts of Appalachia,[19] refitted with ultracite leased from AMS.[20] The corporate influence of these two companies and their close ties to the federal government resulted in intense controls and oversight, as well as access to military assets, should the need arise.[21] The switchover coincided with an increasingly hostile approach to workers at the plant, culminating in a walkout. The workers wanted a contract that gave them job security and were supported by the Associated Miner's Union. As per company policy, all workers who joined the picket outside the plant were fired on the spot.[22]

As the plant was using ultracite, the plant security manager had no trouble convincing the executives that this was a national security issue.[23] The National Guard arrived with heavy tanks, IFVs, and a full load of HalluciGen, Inc. patented riot control gas. The plan was to gas the picketing strikers, making them turn on each other, turning a strike into a deadly riot that could then be leveraged to further weaken organized labor. What they didn't realize was that the gas would turn the peaceful protesters into a violent, raging horde. Once the gas took effect, they rushed through the smoke, attacking the soldiers and tearing off their gas masks, turning a strike into a bloody disaster.[24]

Located in the northern part of the region, Clarksburg was a relatively low priority and the workers managed to secure it with relative ease. The National Guard planned to dislodge them using tanks and got as far as shutting down access roads into the valley, cutting off access to the town, but the Great War precluded any further crackdowns.[25]

An event known as the Clay Riot took place in Harpers Ferry on a Thursday in the early 2070s, a precursor to the automation riots. It prompted a curfew for the town in response to incidents of violence. After the curfew was lifted, Antonio Childs was murdered in a robbery at the Harpers Ferry trainyard.[26]

On Mount Blair, miners seized the Rockhound, a despised symbol of automation. For eight days, the miners held out, striking and demanding a right to work, until the National Guard sent in specially-designed fleets of combat robots - Strikebreakers, commissioned by Hornwright in the wake of the mine protests - to eliminate the rioters. Echoing the events of the battle of Mount Blair over 150 years earlier, the Strikebreakers took out the miners and returned control of the Rockhound to Hornwright.[27]

Seeking to increase profits, or at least to keep up with other companies, an unnamed factory in Pittsburgh began to purchase Protectrons as labor and place them throughout the facility.[28] Despite the empty reassurances of management the workers were rightfully fearing for their livelihoods. The manager of the plant, Tom McMullin tried to delay their eventual termination[29] by complaining to management about problems with the equipment. Declaring that because of this they wouldn't be ready for the next shipment.[30] Management went to the plant to review the machines, seeing first hand how they were working fine, outcompeting their best employees by a factor of five. This was also when the employees began to vandalize the automatrons,[31] two of whom were caught by management and promptly fired.[32]

Two new Protectrons would immediately replace them on the assembly line,[33] followed by the delayed shipment. The company would choose to inform the termination of its employees via a loudspeaker. Declaring that everyone would have to vacate the plant by one PM, "due to budget cuts, this plant is shutting down." At once everyone knew there were no cuts and the machine replacements were here and began to riot. The employees began to barricade the doors and take up arms. As a senior employee, Tom McMullin was blamed by the workers as helping replace them. Now in a panic, he grabbed his pistol and tried to make a break for the door, eventually having to run into a utility closet and lock the door behind him.[34] The workers that cornered McMullin laughed at his pleas for them to vacate the premises, determined to assault him for not being truthful to them about their impending termination.[35] This was when the Protectrons arrived. At first, they believed that they could handle a few Protectrons. Their laughter turned into cursing and screaming as the Protectrons fought back with their lasers, slaughtering the employees still on the premises.[36]

Retrieved from "https://fallout.fandom.com/wiki/Automation_riots?oldid=3507108"
Community content is available under CC-BY-SA unless otherwise noted.