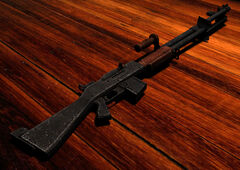 The automatic rifle is a weapon in the Fallout: New Vegas add-on Dead Money.

The automatic rifle is a powerful support weapon firing .308 caliber rounds. The weapon holds 20 rounds in a box magazine, has a higher base damage per shot than any other fully-automatic projectile weapon and a comparatively high Critical Chance.

Although it is a rifle with a very long barrel and high-powered rifle ammunition, it suffers from poor spread when compared to bolt-action and semi-automatic rifles, having the highest spread of any fully-automatic weapon in the game. Even when upgraded, it has the lowest fire rate of any automatic weapon, and its low durability means it will degrade rapidly with frequent use and require regular maintenance. The automatic rifle fires two round bursts with each separate attack in V.A.T.S. at the cost of 35 Action Points.

The automatic rifle can fire a total of about 995 standard rounds, the equivalent of 50 reloads, from full condition before breaking.

This weapon is based on the M1918 Browning automatic rifle, or BAR, with some modifications.[1]