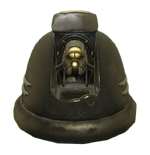 Ceiling/Wall mounted
“Automated Turrets will track and attack their targets relentlessly, but can often be reprogrammed from a nearby computer terminal.”— Fallout 4 loading screens

Automated turrets are robotic weapon systems encountered in the Commonwealth, the Island, and Nuka-World in 2287.

Before the Great War automated turrets were employed by large corporations and utilized by the military to serve as supplemental, unmanned security units, capable of selecting trespassing targets and engaging them.

Over 200 years after the war many of these turrets are still active and are hostile to anyone who finds them. However, some groups like the raiders, Gunners and super mutants have learned to control or create turrets to defend them. The Institute have even engineered their own blue variant of the laser turret, based on pre-War models.

The Sole Survivor can learn to create various automated turrets, from fully integrated machinegun turrets through to jury-rigged laser and missile turrets to defend their settlements. Each turret requires a variety of materials and in some instances, requires an external power source in order to function.

A ground turret is made of a body, motors, barrel, combat inhibitor and either a tripod or column base. Turrets under raider control may also be held in old shopping carts. They have varying types of ammunition based on the Mk version of the turret, some using 5.56mm rounds or incendiary 5.56mm rounds. Wall or ceiling mounted turrets use 10mm rounds.

These turrets have a body, barrel, motors and combat inhibitor selectable as targets. The combat inhibitor is on the opposite side of the barrel, making targeting it harder in combat. With the Killshot perk, the barrel will be significantly easier to target in V.A.T.S. While closed and/or submerged in water, these turrets will not take damage from anything.

Turrets will actively track targets and may become aware of an enemy from a few rooms away. Some turrets are linked to terminals and may be shut down or even made to serve the Sole Survivor if they have found the Total Hack issue with the turret override program. Not all turrets connected to terminals will be able to be affected by this program however, due to a lack of a holodisk player.

There are three main types of turrets in the Commonwealth. There are the ceiling and wall-mounted bubble turrets that can be found in pre-War locations around the wasteland. The second type is the turrets that are floor mounted and used by different hostile groups such as raiders, Gunners, and super mutants. The third type is a settlement turret that the player character can build to defend their various settlements across the Commonwealth.

These turrets can be mounted on walls and ceilings. They are fitted with a dome, which contains the barrel and seals when not actively tracking targets. While inactive they are immune to all forms of damage. A hatch on the dome will open and expose the barrel and combat inhibitor when tracking a target.

The Automatron add-on adds Tesla turrets to the game. Unlike their ballistic and laser counterparts, these turrets don't need to have a direct line of fire to harm the Sole Survivor. They will continue to fire at a point where the electricity can arc to damage the Sole Survivor should they move behind cover. The electricity arcs will only arc to threats that the turrets have detected, even should the Sole Survivor still be standing near a companion who is being targeted while in a hidden or caution state.

One of the most common turrets found throughout the Commonwealth, these were used in many security systems in places such as vaults, corporate buildings and military installations. When hostile they will attack targets with a single laser repetitively, much like a laser rifle.

This variant of laser turret will fire lasers rapidly, almost as quickly as a Gatling laser, although with much less accuracy. These turrets will also have boosted health and damage.

These turrets can be found inside of the Institute, and a similar variant is seen inside Nuka-Galaxy. Instead of the normal red laser, these turrets are equipped with a blue laser variant commonly used in Institute laser weapons.

Effectively a minigun mounted on a wall, the 3-shot machinegun turret can deal lots of damage at close range.

This type of turret fires jolts of electricity, similar to the Tesla rifle. It doesn't need a line of sight, instead of arcing around obstacles and hitting the player character. They can be found in the decontamination room of the robobrain facility.

These are animatronic dummies that are part of Nuka-World's Galactic Zone attraction but also appear in The Gauntlet and the Nuka-World junkyard, in the form of Zetans. They are, however, armed and programmed to attack intruders. They more closely resemble the aliens as they appeared in Fallout 3, even having the same looking alien blaster.

Unique variants of the machinegun turret belonging to Barney Rook. They can be found scattered around the town of Salem, and are controlled by nearby terminals.

The defense constructs are digital entities only encountered in the quest Best Left Forgotten while retrieving DiMA's memories. They protect indexers from sentry intrusion countermeasures. Their appearance is similar to wall and ceiling turrets but are only capable of being placed on the ground. Their exterior is animated with moving green digital print and they fire beams of blue data at enemies.

Machinegun turret Mk I's are the most common and also weakest turret type available. They have decent amounts of health, and use a basic machinegun which deals reasonable amounts of damage in short periods of time. Distinguishable by their faded green paint scheme.

Hardier than the normal Mk I's, Machinegun turret Mk III's use high powered rounds. As with the Mk I turrets, some also have a faded coat of green paint. Despite having 10mm HE labeled on their chassis, they drop 5.56mm rounds

Mk V machinegun turrets are tougher than the previous versions and use incendiary rounds that stun targets. However, they fire at a slower rate. This variant sports a darker paint scheme compared to the other turrets.

These turrets use explosive 5.56mm rounds and are only found in certain locations. They can stun enemies and do very high amounts of damage.

Similar to the MK I machinegun turret, but with higher stats.

These turrets can be built by the Sole Survivor to defend settlements. Each one provides defense to a settlement and will assist when a settlement is attacked. To build these turrets the player character needs different ranks of the Science! and Gun Nut perks. They also will require a large number of components to craft and repair them.

The spotlight turret is installed on a tripod pedestal and produces a light that locks onto enemies when they get close enough. It requires 2 Energy from a generator in order to provide 2 Defense for the settlement. They can be set to target the player character using a linked terminal.

The spotlight can be scrapped for three steel. With Scrapper level 3, the player character will also reclaim one gears and one glass.

A wall-mounted spotlight that only requires one unit of power to function.

Similar to the machinegun turret, but appears to be locked into wherever it is placed. Provides 8 defense points. Mk VII variants use explosive ammo which staggers enemies.

Semi-automatic laser gun on a tripod. It requires power to function and has lower rate of fire than the machinegun turrets, but makes up for it in accuracy and range which allow it to be placed in very high places effectively.

Automatic laser gun on a tripod. While not as accurate as its lighter variant, it makes up for it with its very high rate of fire while maintaining its very long range. Provides 12 defense points.

Turret firing shotgun shells. Fairly powerful but has limited range. Despite being armed with a gun, it requires power to function. Provides 8 defense points.

Turret armed with a quad-barreled missile launcher. Extremely powerful due to its explosive ordnance and will take out even vertibirds with ease. Care must be taken for their placement however, since stray missiles may accidentally knock out generators or other turrets and may even kill the player character.

Automated turrets appear only in Fallout 4.