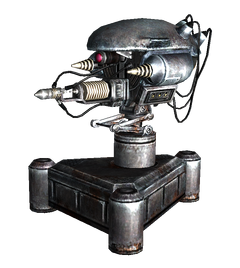 Automated turrets come in two distinct variants, differentiated by both the mounting style and ammo type used. The ceiling mounted type is an automatic firearm shooting conventional bullets, whereas floor mounted turrets are energy weapons, firing laser beams similar to those of the laser rifle, but capable of much faster rate of fire. Both varieties have unlimited ammunition. As a rule of thumb, odd numbered turret models are conventional firearms, and even numbered turrets are energy-based.

Automated turrets are often found in military installations or areas of historical value. Although not too damaging at lower levels, they can be quite deadly if they surprise the Lone Wanderer, or if they are in groups. Both types of turrets can be frenzied by shooting either the targeting chip (on ground units) or the lens (on ceiling units). Once frenzied, the turrets will fire on everything they see. All turrets can be shut down using the Robotics Expert perk if the player character can reach them unnoticed while sneaking. They can also be deactivated via nearby terminals (if any). Turrets will explode when destroyed, potentially dealing damage to the player character if they are standing close to the turret when it is destroyed.

Alien turrets are always ceiling-mounted and can be harder to see, due to their much smaller size. They shoot energy beams similar to the alien atomizer and |disintegrator in rapid salvos of five shots. The individual pulses aren't highly damaging, but can take a chunk out of the Lone Wanderer's health if they get caught out in the open for too long.

While they cannot be shut down or frenzied via terminal, it is possible to remotely detonate them using nearby switches aboard the Mothership. They explode in a blast of green plasma, similar to a plasma grenade. Like normal turrets, they are unable to shoot directly below them and can be shut down using the Robotics Expert perk if the player character is able to reach them by jumping while crouched.

These can be found in buildings and on bridges and ceilings. A couple are found at Fort Independence. These turrets are often used by organizations such as the Brotherhood Outcasts, but can be found widely across the wasteland. Even raiders use them as sentries. They can be frenzied just like any other turret when the player character cripples the lens.

A ceiling-mounted turret of alien origin found aboard Mothership Zeta. Unlike its Earth equivalent, it is equipped with beam weaponry. 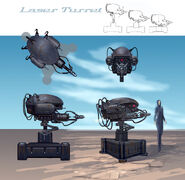 Bunker turret firing in Operation: Anchorage
Add an image to this gallery
Retrieved from "https://fallout.fandom.com/wiki/Automated_turret_(Fallout_3)?oldid=3129824"
Community content is available under CC-BY-SA unless otherwise noted.