The auto axe is a melee weapon in the Fallout 3 add-on The Pitt.

When Marco first gives the Lone Wanderer an auto axe, he explains that he has been making them from industrial materials and scrap metal from the bridge, mostly parts of various cars and vehicles.[1][2]

The auto axe is a modified steel saw upgraded with car engine parts,[Non-canon 1] with the original tool strongly resembling a concrete saw or industrial grinder. The original blade seems to have been modified or replaced with a blade of a different kind, one with four roughly circular holes at the edges which creates four individual blades resembling axe blades.

The auto axe inflicts large amounts of damage with its sharp rotating blades and functions like the Ripper. It can also be repaired using Rippers, including the unique Ripper, Jack. Damage done by this weapon can be increased with the Auto Axpert perk, which is available within The Pitt, after collecting 10 steel ingots from the steelyard. 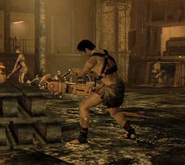 A screenshot of the auto axe 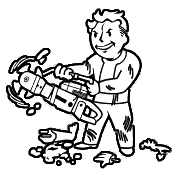 As depicted in Auto Axpert 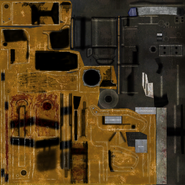