The authority glasses are a set of heavily tinted glasses in Fallout: New Vegas. They can be found commonly throughout the Mojave Wasteland. They are frequently worn by NCR personnel.

Can be repaired with other pairs of themselves or eyeglasses, reading glasses, tinted reading glasses and sunglasses. The biggest difference from normal sunglasses is the fact they are always blackened out rather than requiring a bright light source to cause them to darken. Also, when worn with a goggles helmet, the goggles may be tinted black.

Because of their larger size in comparison to other glasses, Authority glasses clip through some facial presets.

Authority glasses in a sandbag shelter, northwest of the old nuclear test site 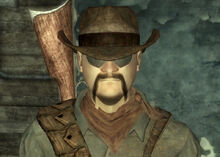 Ranger Jackson as an example of how Authority glasses clip through some faces
Deutsch Русский Українська
Community content is available under CC-BY-SA unless otherwise noted.
Advertisement