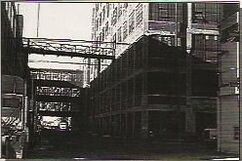 Image used as concept design for Austin in the FO:BOS2 design document

Austin is a location in the Texas Wasteland.

Austin is a city inhabited by super mutants and led by the intellectual super mutant Keats. Keats' leadership is not accepted by all. While his goal of uniting humans and mutants is noble, conspirators seek to reverse it. The city itself is suffering from an infestation of mutant plants that have also knocked out the power to the city.[1]

The main areas of the city are divided into five medium to large maps, the power plant consists of two medium maps. In one of the maps of the city the player character will find a gas station with a working pump and items essential to the storyline.[1]

Even if the player character didn't side with Shale, Keats will still be assassinated leading to Shale's take over. Later in the game, the player character will have to return to Austin only to find Shale and a group of super mutants ready to fight, regardless of whether Shale was sided with or not.[3]

Austin was going to appear in the canceled Fallout: Brotherhood of Steel 2.

Retrieved from "https://fallout.fandom.com/wiki/Austin_(city)?oldid=3219421"
Community content is available under CC-BY-SA unless otherwise noted.