Eye for an Eye
Arizona Scavenger 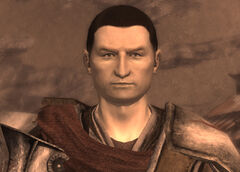 Aurelius, without the helmet

“It is the armor of a Centurion. You have the rare honor of beholding it unspattered by the blood of my inferiors.”

Aurelius of Phoenix is a high-ranking member of Caesar's Legion assigned as the commanding officer of the camp at Cottonwood Cove in 2281.

A tall man, standing at 6'5" (1.96 m),[1] Aurelius was selected by Caesar to establish a bridgehead on the west bank of the Colorado River after Vulpes Inculta engineered the destruction of Camp Searchlight. Aurelius selected Cottonwood Cove as his base of operations, right across the Colorado's narrows.[2] Although he was assigned only two contubernia (two squads of eight men each), his aggressive tactics and ruthless preying on NCR Army patrols allowed him to kill and capture four times as many enemy soldiers (around 64 casualties for the NCR, in other words).[3] His second in command, Decanus Severus, is instrumental in Aurelius' efforts as quartermaster.[4]

Aurelius has every reason to be proud of his standing as a centurion, but does not take kindly to people who eclipse him[5] or test his patience (he has a habit of crucifying the latter).[6] With his pride comes the show of his centurion armor which he earned through decades of conquest and utter devotion to Caesar.[7][8] Adding to his aggressive demeanor is his abject hatred of profligates. He considers them cowards, particularly when they refuse to face his forces openly and try to fight through clever means.[9] He takes an abject delight in the mere thought of killing NCR troopers.[10] He even offers a bounty to any who turn in NCR dogtags to him,[11] and it is possible to earn his respect for killings assumed with acquiring the dogtags.[12][13] In fact, he might even admit that he misjudged someone if they prove to be a warrior on par with Legion veterans.[14]

However, Aurelius does seem to have a softer side, with a toy car, teddy bear and a Grognak the Barbarian comic in his office. There is also beer and cigarettes there, and the question of whether it is his personal stash or confiscated contraband remains open.[15]

Aurelius of Phoenix appears only in Fallout: New Vegas.

Aurelius of Phoenix card from the collector's edition of the game.