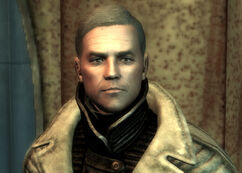 The Waters of Life
Finding the Garden of Eden
The American Dream
Take it Back!

“I should have killed you right away. We have the GECK, we'll get the code. We don't need you.”

Colonel Augustus Autumn (born in 2222) is the commanding officer of the Enclave Department of the Army in the Capital Wasteland in 2277 and the main antagonist of Fallout 3.

Augustus was born and raised on the Enclave Oil Rig. His father, Autumn Senior, was a high-ranking scientist in the Enclave at the time of its destruction by the Chosen One in 2242. He then received orders from the new President of the United States who succeeded Dick Richardson, a former presidential advisor named John Henry Eden, to take all surviving Enclave troops and relocate them to the Raven Rock military base on the East Coast. Autumn Senior obeyed that order, gathering his troops and their equipment as he led them eastwards through the wastelands of the post-nuclear United States. Upon the Enclave's arrival in the Capital Wasteland, he was the only one who knew that President Eden was actually a ZAX supercomputer unit that had achieved self-awareness. Prior to his death, Autumn Senior passed that knowledge on to his son, who would become the leader of the Enclave's military and eventually attain the rank of Colonel.[1]

Colonel Autumn has proven to be far less subservient than his scientist father, often openly disagreeing with the president's decisions. He did not trust Eden completely, fearing that some of the supercomputer's methods were too extreme, and kept the ZAX destruct sequence for the president in his room as a last resort. At some point, he ordered experimental testing on ED-E be carried out while the robot was fully functional, to the shock of Dr. Whitley.

During the Enclave assault on Project Purity, Autumn confronted James and seemingly died after the scientist flooded the project's main chamber with deadly radiation to prevent the Enclave takeover. However, he managed to survive by injecting himself with a mysterious agent — likely a more effective equivalent of Rad-X or RadAway.

Colonel Autumn is extremely ruthless and shows no regret over his actions, such as shooting unarmed captives or breaking promises of mercy, as long as it serves the Enclave's ends. He is a firm believer in the revival of the United States as a nation of power in the post-nuclear world, and will do almost anything in order to fulfill this vision.

He is mentioned in Lonesome Road; it is stated that he wanted all the assets used in the development of the duraframe eyebots to be redirected towards Enclave Hellfire armor. Whitley was not happy with this idea, so he sent ED-E away to Navarro.

“People of the Capital Wasteland. I am Colonel Autumn. By now, you have encountered Enclave troops in your towns, in your settlements. When you see the Enclave, you see the United States government. We are authorized to restore order and civility, by any means necessary. Just stay out of the way and let us do our job. Interfere with the Enclave's mission, and you will be dealt with. Harshly.”

Augustus Autumn is a firm and militant supporter of what he sees as the legitimate continuation of the United States government and return to pre-War American values, which he believes can finally bring order and stability to the former capital of America. The Enclave, which he believes possesses the only true claim to the Capital Wasteland, represents his ideals of a liberation and restoration of the American homeland to its righful owners. Unlike his scientist father, Autumn Sr., Augustus pursued a military career, eventually being promoted to the rank of colonel and embracing the revanchist and jingoistic ideals of the "true" America. Nonetheless, he maintained his doubts of the Enclave's hierarchy; particularly its newest "president," John Henry Eden, being the only one to be aware of Eden's true existence.[2]

Unlike President Eden, Colonel Autumn's views on mutants did not extent to the general surface population, instead retaining his harsh and stern manner while embracing a slightly more messianic view on rebuilding civilization. Despite his relative moderation, he rarely uses diplomacy to achieve objectives and is willing to murder civilians in cold blood to demonstrate his resolve in ensuring the supremacy of the Enclave, although he will surrender the Purifier to the Lone Wanderer if convinced of the futility of his mission. His beliefs eventually led to him directly opposing Eden's goals of total extermination of any creatures even slightly affected by radiation and the Forced Evolutionary Virus, with Eden apparently abandoning his plans, most likely to appease him. In reality, Eden had secretly operated behind the colonel's back and developed a modified FEV sample to bring his goal of total eradictation of all mutated life forms.[3]

Colonel Autumn continued to serve the president, albeit reluctantly, while also putting his own plans into operation. Upon establishing his base of operations at Raven Rock, Autumn had asserted an increasing amount of control over the Enclave's military forces, holding a large sway of personal power over the ranks. His militancy and jingoism was matched with a ruthlessness and cunning which allowed him accumulate a large power base within Raven Rock, even to the extent of successfully overriding the president's direct orders in regards to the Lone Wanderer; who he believed was a loose end to be eradicated. While Autumn did not trust and even argued with the president, he never resorted to his failsafe in any of his dealings, although it remained a possibility. This showed that, despite his emnity with Eden, Colonel Autumn remained a steadfast and loyal commander whose main concern was the successful takeover of Project Purity.[4]

His fanatical devotion to procuring the purifier led him to stage an invasion of the Jefferson Memorial, with the intention of forcing the scientists recruited by James to work with Enclave scientists to ensure the maintenance and operation of the facility. After executing one of the scientists, he was temporarily incapacitated by James, who flooded the control room with radiation. After a successful recovery, he would eventually abduct the Lone Wanderer, retrieve the GECK and attempt to coax the code to activate Project Purity out of him. Autumn's own goal was to restore the facility into operation under strict Enclave control, which would allow them to promote themselves as the saviors of the Capital Wasteland, and establish a firm powerbase as the foremost military power and a symbol of the restoration of order and stability as the United States of America.[5]

* Only during Take it Back!

Augustus Autumn appears in Fallout 3 and Fallout Shelter, and is mentioned in the Fallout 3 add-on Broken Steel and the Fallout: New Vegas add-on Lonesome Road.

Colonel Autumn's quarters in Raven Rock. The Energy Weapons bobblehead can be found in here. 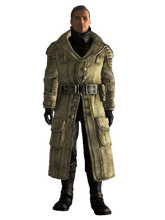 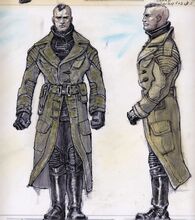 Retrieved from "https://fallout.fandom.com/wiki/Augustus_Autumn?oldid=3289517"
Community content is available under CC-BY-SA unless otherwise noted.