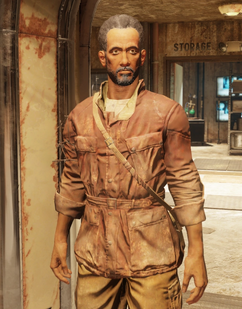 Here to Stay
Donations for the Clinic

Aubrie Willem[1] is a member of the Settlers residing in Foundation in 2103.

A medical practitioner with over thirty years of experience, Aubrie Willem is one of the co-founders of Foundation and its primary medical doctor. Prior to the Great War, he lived in Pennsylvania and worked as a medical practitioner.[2] He was asked by Paige to set up an observation camp nearby.[3] He was the only survivor of a Scorched attack and fled to a secluded cave.

Depending on the player character's actions, he will either return to Foundation to inform Paige of the reality of the Scorched Plague or remain in quarantine, eventually leading him to commit suicide.

Aubrie appears only in Fallout 76, introduced in the Wastelanders update.

Retrieved from "https://fallout.fandom.com/wiki/Aubrie_Willem?oldid=3461907"
Community content is available under CC-BY-SA unless otherwise noted.