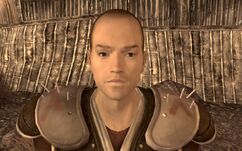 Veteran Atticus is a veteran legionary within Caesar's Legion, stationed at the Fort in 2281. He was cut from the final version of Fallout: New Vegas but remains in the game's files.

Not much is known about Atticus. His dialogue options appear to indicate that he is a goods runner.

He has two dialogue options - both greetings (that he says when interacting with him):

There is another Atticus in Fallout: New Vegas that was not cut. He is stationed at Caesar's Legion safehouse. He has a separate ref I.D. and is African American.

This Atticus does not appear in any Fallout game; he is found only in the game files of Fallout: New Vegas.

Retrieved from "https://fallout.fandom.com/wiki/Atticus_(cut_content)?oldid=3242470"
Community content is available under CC-BY-SA unless otherwise noted.