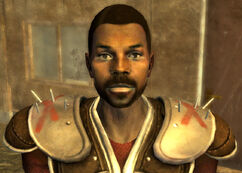 Keeper of the Caesar's Legion safehouse

“I'm here to keep everything in order. As a friend of the Legion, I can offer you some supplies while you're here.”

He visits the safehouse to resupply every three days and offers the Courier various items such as two Stealth Boys, two Cateye, or two random skill magazines.

Another NPC named Atticus is found in the game's files. He too is a member of Caesar's Legion veteran faction and offers similar dialogue options such as giving the player character various items. This version, however, was set to appear in The Fort.

When updating the game into a newer version, and then creating a new game, Atticus or any other safehouse keepers will no longer appear. Removing and re-installing the patches will fix this. [verified]

Retrieved from "https://fallout.fandom.com/wiki/Atticus?oldid=3353517"
Community content is available under CC-BY-SA unless otherwise noted.
... more about "Atticus"
RDF feed
Has platform
Playstation 3 +