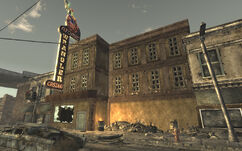 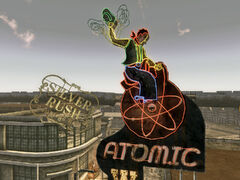 The Atomic Wrangler casino is a casino in Freeside, situated across the street from the Silver Rush.

“It's not much to look at, but if you can't afford to get into The Strip, the Atomic Wrangler's the best place to gamble in Freeside.”— Fallout: New Vegas loading screen

The Atomic Wrangler, the only active casino in Freeside (featuring a neon sign of a futuristic cowboy riding a stylized atom), is also a flophouse, brothel, and source of chems, located just down the main drag. It is run by the Garret twins, protected by their thugs, and is a common hangout for the Van Graffs and the Kings. Many caravaneers and poor (but not impoverished) NCR folks can also be found here.[1]

The main room has a vaulted ceiling, a stage, and a bar. The room directly opposite the entrance features the casino's cashier and casino games. The cashier's room contains some pre-War money and chems in the safes. To the right are the bathrooms and a staircase to the second story balconies.

Behind the bar is a kitchen and storeroom, accessible via a door around the corner near the bathroom with a Very Hard lock. Both Francine Garret and James Garret have the key to the room, but it will eventually become unlocked as soon as one of the Garrets head upstairs to their room, as they neglect to relock it.

The storage room/kitchen area behind the bar contains a significant amount of common items of moderate value, such as various alcoholic beverages. The Courier can also find a large number of fresh apples, pears, and carrots (at least a half-dozen each), as well as a weapons locker and medicine locker, both containing many useful items.

This level has a balcony that oversees the stage and bar. Off of the balcony are four rooms. A rentable room is located in the eastern corner of the second floor. Stairways lead back down or up to the third level.

On the second level, there is a door that leads to the corner room, which the player character gains access to once the Debt Collector quest has been completed.

This level is where the employees, including the Garret twins, live. In the employee living area, five guards can be found either milling around or sleeping. The door to this room is secured with an Average lock or opened with the key held by the Garrets. Guards here will not be hostile initially, instead following the Courier around, repeating a warning to leave. To the right is a walkway to other rooms, including two bathrooms containing first aid boxes. Surrounding sleeping areas have footlockers with minor loot. A room to the right of the sleeping area is filled with file cabinets, metal crates, and a gun cabinet.

After the player character earns 5,000+ chips, they will be banned from playing games in the Atomic Wrangler casino. They can still use its other functions, such as the bar and services of the prostitutes (if the Wang Dang Atomic Tango quest has been completed), but they cannot win any more money. This ban is permanent. If the player character breaks the house limit before getting any comp gifts (by getting a large win) they will not receive any comps they have missed. There is no floor manager at this casino, so the comp gifts are awarded directly to the player character upon reaching each winning milestone. Play is still interrupted by the player character being forced out of whichever game they were playing. 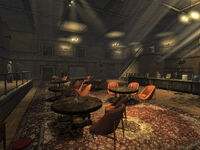 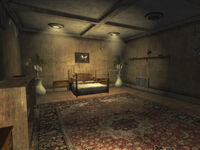 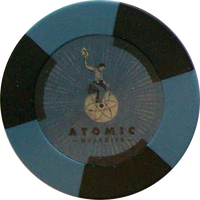 Atomic Wrangler billboard
Add an image to this gallery

Retrieved from "https://fallout.fandom.com/wiki/Atomic_Wrangler_casino?oldid=3247265"
Community content is available under CC-BY-SA unless otherwise noted.