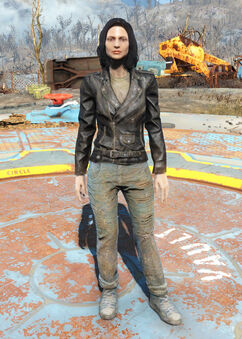 Atom Cats jacket and jeans is an obtainable outfit that appears in Fallout 4 and appears to be a Greaser jacket modified with the Atom Cats logo on the back.

The Atom Cats jacket and jeans appear as a Perfecto leather jacket with an Atom Cats patch on the back, worn over a faded T-shirt, along with jeans and worn white sneakers.` 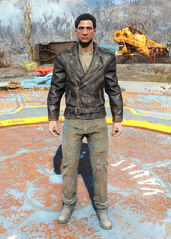 Male version
Add an image to this gallery
Retrieved from "https://fallout.fandom.com/wiki/Atom_Cats_jacket_and_jeans?oldid=3140754"
Community content is available under CC-BY-SA unless otherwise noted.