Fallout 4
“Like you haven't heard of us. We are the Atom Cats, a gang of the most with it way out cats in the Commonwealth.”— Zeke

The Atom Cats are a minor faction dedicated to the usage of power armor. They seem to be a reference to mid-1950s Greasers, with leather outfits and a hotrod-themed paint job for their power armor. They are often harassed by Gunners and raiders who are trying to steal their suits.

One of the named members, Duke, can be found roaming throughout the Commonwealth. Upon interaction with the Sole Survivor, he will mark the Atom Cats garage on their map.

They have roaming scavengers visiting the garage roughly every other day to sell the Atom Cats the armor they find. The Atom Cats buy a large amount of T-60 power armor from the scavengers, as well as unsteady amounts of T-45 and T-51 units. X-01 power armor is rarely found (roughly 1% chance per reset cycle), though it's not unheard of. Due to the steady supply of the T-60 power armor parts, this is the standard armor type used by the Atom Cats.

Zeke states that he single-handedly slew a pack of feral ghouls once to claim the garage. He then assembled a group and showed them "the way of cool." One member, Aimin' Andy, is mentioned to be deceased, and was responsible for the "rockin tunes" now played in the garage.[1]

The Atom Cats offer a set of power armor for purchase, as well as membership upon completion of a quest to repair the pump at the nearby Warwick homestead and assistance defending against a Gunner attack.

When the Atom Cats begin to like the player character, the latter receives a discount in the store, in form of Friend of The Cats perk.

The Atom Cats appear only in Fallout 4.

The Atom Cats Garage, the headquarters of the group 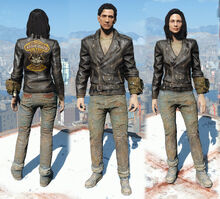 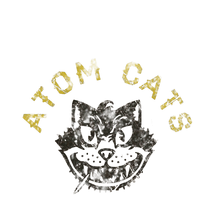