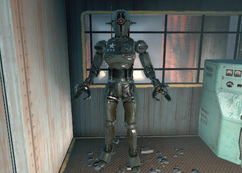 Atom's Wrath is an Assaultron that accompanied Brother Henri in 2287 on his journey to the sentinel site. It continues to protect him and the nuclear weapons stored inside the bunker complex.

Atom's Wrath was programmed by the Children of Atom to defend the members of the church's congregation in the Glowing Sea. It was on a mission with Brother Henri and his group to claim the sentinel site and the Mark 28 tactical nuclear warheads housed there for the cult. In their attempt to activate the launch sequence a nest of feral ghouls was disturbed and all but Atom's Wrath and Brother Henri were killed.

Atom's Wrath takes its lead directly from Henri, meaning it will remain passive as long as the Sole Survivor does not provoke Henri into resorting to violence. Should the mad cultist be turned hostile in any way, be it by mocking him in dialogue or by other means, Atom's Wrath as well as the nearby machinegun turret will join him in attacking the trespasser. Since said fight will most likely happen in extremely close quarters, the Assaultron usually will not get much of a chance to deploy its devastating eye laser weapon, thus somewhat mitigating its threat potential. Its powerful melee attacks can still pose a minor problem for an unprepared enemy, mostly due to the robot lurking in an alcove from where it will spring a surprise flanking attack if the enemy did not pay enough attention to their surroundings before engaging Henri in dialogue.

Despite being programmed with a female voice pattern, Atom's Wrath is consistently referred to as male by Henri in dialogue.

Atom's Wrath appears only in Fallout 4.

Retrieved from "https://fallout.fandom.com/wiki/Atom%27s_Wrath?oldid=3397484"
Community content is available under CC-BY-SA unless otherwise noted.