Atom's Spring is a location on the Island in 2287.

The Children of Atom believe that this spring was blessed by Atom. They send those who wish to join their ranks to drink from the spring, knowing full well that the spring is poisonous.[1] They believe that those who survive are capable of serving Atom. Those who return are welcomed into the cult; however, some suffer brain damage as a result.[2]

The site features a highly irradiated spring where the Sole Survivor is sent during the quest Visions in the Fog, to drink from the waters in order to receive "Atom's Gift."

Drinking from the spring before obtaining the quest Visions in the Fog will add radiation damage, but the Sole Survivor will not see the Mother of the Fog until they begin the quest.

Atom's Spring appears only in the Fallout 4 add-on Far Harbor. 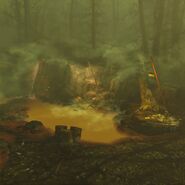