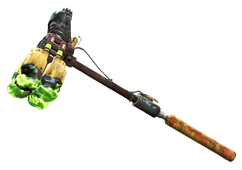 Atom's Judgement is a unique super sledge in the Fallout 4 add-on Far Harbor.

The weapon has a unique design with the hammerhead comprised of four damaged fusion cores instead of the regular plain steel block, giving it a much more massive overall look. Said cores appear to have been deliberately damaged in order to leak glowing green radioactive material from the contact area, which is the source of the immense amount of radiation damage the hammer can inflict. When swung or simply held in hands, Atom's Judgement emits a sickly green vapor from its head that leaves a smoke trail whenever the weapon is moved in any way.

Despite its non-standard visual appearance, Atom's Judgement's properties are provided by a unique legendary effect of the same name, not by some physical modification like Kremvh's Tooth's blade, for instance. Regular super sledge modifications can be applied as usual, but the radiation damage effect cannot be removed and applied to other weapons.

Atom's Judgement is one of the most powerful melee weapons in the game, capable of inflicting significant amounts of damage, far in excess of what a standard super sledge can accomplish. In addition to the sledge's massive ballistic damage, maxing out all damage-related perks can push the radiation damage to exceed 890 points per hit. While most creatures and animals are immune to this radiation component, human enemies will be susceptible regardless of the type of armor equipped.

Retrieved from "https://fallout.fandom.com/wiki/Atom%27s_Judgement?oldid=3337317"
Community content is available under CC-BY-SA unless otherwise noted.