The Atlantic Offices is a location in the Commonwealth in 2287.

This location consists of a partly buried building infested by feral ghouls with three above-ground floors and two below-ground floors in the Glowing Sea. The central third floor is accessed through a hole in the northern wall. Stairs lead down to the second floor, which has two holes on the east side that can be dropped through to reach the first floor, one of which is trapped by a pair of laser tripwires triggering a Tesla arc.

From the first floor, one can take the elevator up to the fifth floor, which contains an Advanced-locked safe and a Novice-locked door to the ladies' restroom revealing a first aid box. The collapsed ceiling affords access to the roof. As the elevator will only return to the basement, the only way to leave the building is to jump down from the roof.

The fourth floor may be accessed through a hole in the eastern wall, up the hill and beneath the "Atlantic Offices" sign. This floor features the elevator shaft, several holes that may be dropped through to reach the third floor, and a room holding a toolbox behind a closed inaccessible security door opened via a nearby terminal.

Fusion core - In the generator on the roof.

There is an unused interior cell with the name "Atlantic Offices" in the game's files. It was intended to be placed in a green skyscraper in the Financial District near The Shamrock Taphouse, based on the skyline visible from the cell. There are also two sets of double doors that do not work within the cell. The skyscraper still exists in the game, though it is inaccessible. The entrance doors use the same model as the doors in the cut cell. One of the doors can be interacted with from the exterior, although it does nothing besides open and clip into the barrier.

The Atlantic Offices only appears in Fallout 4. 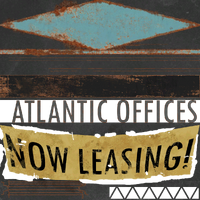