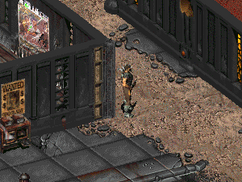 "Athabaska" Dick is a rather mysterious individual who can be found in Redding, not far from the local casino. Speaking to him does give the feeling that there is more to him than what shows.

Athabaska has the appearance of a miner who knows his way around a pit, complete with a large beard and general scruffiness.[1] His drawl just completes the image of a typical rugged cowboy (one addicted to Jet, that is).[2] Most people just call him Dick, although there are some that call him Athabaska.[3] He works occasionally for the Morningstar Mine,[4] though his real value lies in the information he can provide. He is an excellent source on the history of Redding, including the Great wanamingo mine, shut down after wanamingos attacked it and the slave miners simply blew up the entrances to trap the monsters inside.[5]

If the player character completed Deliver jet antidote to Painless Doc Johnson, Athabaska Dick will comment on how the thought of Jet makes him sick and that he thought he was going to die last time he used Jet.

Athabasca Lake is a lake in Canada. Athabaska Dick shares a similar naming convention with Marge LeBarge who also gets part of her name from LeBarge Lake in Canada as that is where she's from. It is unknown if Athabaska is also of Canadian descent like Marge LeBarge as the Chosen One always refuses to hear about how he got his nickname.

Athabaska Dick appears only in Fallout 2.

Retrieved from "https://fallout.fandom.com/wiki/Athabaska_Dick?oldid=3339710"
Community content is available under CC-BY-SA unless otherwise noted.