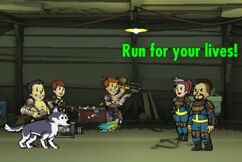 “Three down, one to go, and thanks to Three Dog, we know where Death's cave is. But will he be awake? Only one way to find out!”

At Death's Door is an overseer quest and part of the Horsemen of the Post-Apocalypse Part 3 multi-stage questline in Fallout Shelter.

You will encounter a group of dwellers from Vault 144 who can either be fought or passed without a fight, depending on your dialogue choice. It is possible to gain one bottle of Nuka-Cola Quantum after this conversation.

Then you may work your way through each level, some of the rooms containing more vault dwellers who must be fought, there are also two pairs of radscorpions on the third floor down and one pair on the fourth. You can also skip several rooms and go to the bottom level, to deal with an alpha deathclaw and then face Death itself, which is a mole rat boss.

Rewards
Add a photo to this gallery
Retrieved from "https://fallout.fandom.com/wiki/At_Death%27s_Door?oldid=3268507"
Community content is available under CC-BY-SA unless otherwise noted.