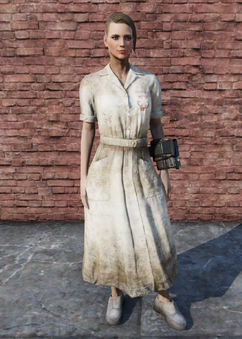 The asylum worker uniform is a collared button up dress worn by pre-War asylum workers. It features short sleeves, three pockets and a logo on the chest. The outfit also includes a pair of white lace-up shoes.

The uniform is available in several different colors, which include blue, brown, forest, green, pink, red, white and yellow.

The Asylum worker hat (white) is not recognized by the game for challenges that require the player to wear a complete asylum uniform and hat, due to having been assigned a wrong keyword in the data files.

Retrieved from "https://fallout.fandom.com/wiki/Asylum_worker_uniform?oldid=3505143"
Community content is available under CC-BY-SA unless otherwise noted.