Astoundingly Awesome Tales was a pulp-style magazine written before the Great War.

A pulp magazine series featuring science fiction stories, covering topics such as mutants, monsters, and Zetans. The cover art for the magazine depicts imagery from each issue, highlighting the "astounding" tale. Reading an issue of Astoundingly Awesome Tales will give the player character a unique bonus.

The Atomic Chronicles of K.D. Inkwell

A volume-by-volume compilation of various chronicles describing the adventures of a time-travelling historian, Alistair, and the scribe Cynnoc. Such complications include Volume 101: The Scribe of Avalon.[1]

The name of the magazine is a take on pulp science-fiction/fantasy/adventure magazines such as Amazing Stories and Weird Tales. 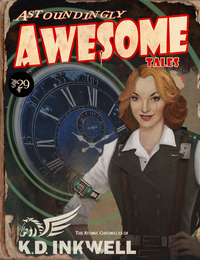 The Scribe of Avalon
Add a photo to this gallery

Retrieved from "https://fallout.fandom.com/wiki/Astoundingly_Awesome_Tales?oldid=3410417"
Community content is available under CC-BY-SA unless otherwise noted.