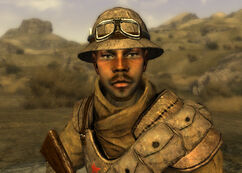 We Will All Go Together
Eye for an Eye 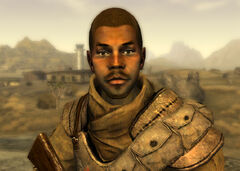 Astor, without his helmet

“Killing their Centurion and leadership would be a start, but finding a way to permanently shut down that dock is what we really need.”

First Sergeant Astor is a soldier in the New California Republic Army, previously stationed at Camp Searchlight. In 2281, he can be found patrolling west of the camp with a small squad of troopers.

First Sergeant Astor is a senior non-commissioned officer in the NCR Army, who was stationed at Camp Searchlight as of 2281. Astor was on patrol when a frumentarii squad irradiated the camp. While the rest of the camp was either killed or transformed into feral trooper ghouls, Astor and the handful of soldiers who had been on patrol with him when the attack happened remained alive. Astor voluntarily stayed in the area to keep watch and warn others away from the radioactive, ruined town, accompanied by surviving soldiers of the garrison at Searchlight.

First Sergeant Astor's log gives indications that despite his attempts to look out for his soldiers and the situation that they are in, Astor blames himself for the destruction of the rest of the Searchlight garrison. It also indicates that Astor's morale is lower than he admits.

When asking Astor about Private Edwards, Astor will say a rabid dog needs to be put out of its misery, but no further dialogue options will occur. To save Private Edwards, you must not take his dogtag (the 10th and final dog tag) by force or by the Speech check. You must clear out the giant radscorpions that spawn outside his home, inform Edwards, and then talk to Astor about Private Edwards. In doing so, after Astor says a rabid dog needs to be put down, you can then assure Astor that Edwards "Is not Feral." You can then ask Astor where he recommends Edwards go, or convince Astor to accept him into his camp by passing a Speech Check of 50 or having 7+ Intelligence. Finally, return to Edwards and tell him the good news. If Edwards goes where Astor recommended or is accepted back in Astor's unit, you receive Good Karma and Edwards rewards you with a few caps and drops his dogtags for you to pick up. [verified]

Retrieved from "https://fallout.fandom.com/wiki/Astor?oldid=3122550"
Community content is available under CC-BY-SA unless otherwise noted.