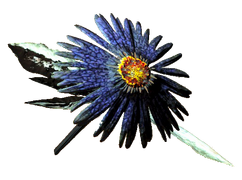 Aster is a consumable item featured in the Fallout 4 add-on Far Harbor. It is an ingredient used in making seasoned rabbit skewers at cooking stations for +1 Luck for 30 minutes as well as Fire Belly to gradually increase damage at low health.

A mutated flower from the genus Aster. Its purple color is muted relative to its pre-War ancestors, making it somewhat difficult to pick out from other plants on the Island.

Aster in Acadia will pay eight caps per aster delivered to her.

Aster growing on the Island
Add an image to this gallery
Retrieved from "https://fallout.fandom.com/wiki/Aster_(consumable)?oldid=3341164"
Community content is available under CC-BY-SA unless otherwise noted.