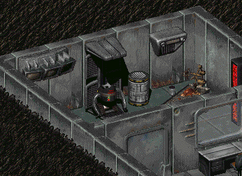 Skynet as a companion

Assemble body for Skynet is an unmarked quest in Fallout 2.

“Science logs indicate a cybernetic brain in bio storage level 4. Skynet will be able to upload into this storage unit.”— Skynet

The Chosen One discovers this quest on the third floor, by talking with Skynet's mainframe. (Be sure not to lie to it.) To discover the pieces necessary to help, go to the next room past the door to the room with the mainframe, to a room with an inactive robobrain and a nearby computer terminal. Conduct a system check with the computer terminal to determine the needed pieces.

All pieces for Skynet can be found at the Sierra Army Depot. The bio med gel is on the floor just above and to the right of the robobrain. You can get a robot motivator from one of the robobrains, by killing one and taking it off its body. There are plenty on the second floor, but the fight could be problematic for an inexperienced Chosen One. If the player uses the retinal scanner without the eye on level 1, robots spawn and you can get it without bigger problems. Thirdly, Skynet needs a brain. On the fourth floor, retrieve a brain from the storage system. The system will go critical and depending on the Chosen One's Science skill, a brain can be saved, these are the abnormal brain, chimpanzee brain (40%), human brain (80%), and cybernetic brain (130%). Before the level check, a Science skill roll with -30 modifier is done, failing which gives -40% penalty. The quality of the brain used will determine Skynet's skills in combat.

Take these three things and go to the room just beyond Skynet's mainframe, where you will find an inactive robobrain. Fill it with the bio med gel, and install the brain and motor. Then activate the system via the nearby computer console, and the robot will come online.

Skynet will join the Chosen One as a companion at this point, assuming they have room.

It is impossible to recruit Skynet if the player previously unleashed a virus from storage while retrieving a brain. Upon activating Skynet's body, the wait period will be longer than the time given to evacuate the base to flee the disease, causing the player to die once Skynet powers up. Further, if the player attempts to activate the robobrain before installing the three necessary components, it will explode, rendering it impossible to recruit Skynet as a companion.

Retrieved from "https://fallout.fandom.com/wiki/Assemble_body_for_Skynet?oldid=2839520"
Community content is available under CC-BY-SA unless otherwise noted.