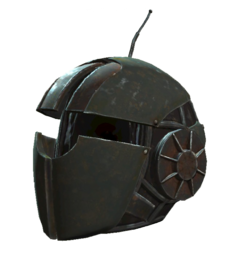 The assaultron helmet is a helmet in the Fallout 4 add-on Automatron.

The assaultron helmet appears to be the hardened head armor of an assaultron's head modified to be used as protective headgear. The face plates of the helmet extend toward the back of the head, revealing the wearer's face, while their weapon is holstered. When drawing a weapon, the mechanisms on the side of the helmet cause the plates to contract around the user's face, bearing a more kindred appearance to the assaultron.