Assaultrons are robots found in Appalachia.

The Assaultron robot was constructed by RobCo[1] and sold to the U.S. military as a frontline wartime combatant sometime around the year 2072,[2] and to the Whitespring Resort as security robots. It is fast and deadly at close range and employs a devastating laser at a distance.[1] The dominator variant can also use stealth technology.

The Assaultron is a durable, agile robot designed for melee combat, equipped with actuators and chain-powered limbs, and is covered in thick armor plating. Modular arms allow for swapping its loadout with weaponry most appropriate for the mission profile. The Assaultron's standard weapon is a combination of claws and blades. Its legs are powered by a combination of hydraulic actuators and springs. This allows it to move upon its foes quickly and unleash a devastating melee chain attack. The crown jewel is the head laser, mounted in its center and capable of devastating the opposition from a distance when fully charged.[1]

An Assaultron's head houses an incredibly powerful laser that requires charging up before being fired. The Assaultron's face will become surrounded by red electric energy when it is charging its laser attack, after which, a potent laser beam will be unleashed, causing severe damage.

The Assaultron's weak points are their legs. If destroyed, they will continue to pursue their target by crawling on the ground. After taking sufficient damage, such as losing all their limbs, they will charge a potentially deadly explosion as a last desperate attempt to eliminate the target by setting their internal power cores to go critical, carrying the explosive force of a mini nuke. Killing them before they can activate it will result in a normal death. On lower levels, they can be challenging to face head-on due to their fast speed and powerful attacks. A low-level player character may have difficulties killing or crippling the Assaultron before it's able to get into melee range or charge its lethal laser attack. Legendary variants can be much more dangerous as they recover any crippled limbs when recovering their health and explode violently a few seconds after being killed.

The standard Assaultron is equipped with a charging, head-mounted laser and gyrating claws. The Assaultron invader is modified to deliver electric shocks with its claws.

An Assaultron with a darker finish and equipped with stealth technology. Instead of the standard claws, they ambush their targets with retractable blades.

A heavily armored Assaultron armed with tri-barreled miniguns in place of their normal claws or blades. Mostly encountered as the end boss in Daily Ops when robots are the hostile enemies. The intimidator is content to sit back and fire at its opponents instead of closing distance and may use concealment to ambush opponents.

The following variants are renamed and repainted versions of the Assaultron, Assaultron invader and Assaultron dominator.

An Assaultron branded in aqua Arktos Pharma colors, only encountered in the Arktos Pharma biome lab, either during or outside of Project Paradise.

Assaultrons that have been reprogrammed by the Blood Eagles, encountered in Watoga Underground.

An Assaultron variant encountered at Vault-Tec University as part of its automated police force.

A jet black Assaultron marked with the 13 stars of the U.S. flag after the reforming of the 50 states into 13 Commonwealth territories, similar to the Enclave symbol. They guard the Whitespring bunker, or may be sent on patrol during Bots on Parade.

An Assaultron serving in the private security force at Hornwright Estate.

An Assaultron bearing the emblem of Watoga, patrolling the city streets. Normally hostile to anyone entering the city limits, it can be rendered passive via completion of Mayor for a Day and will only engage enemies that are on the city's perimeter, such as feral ghouls or super mutants.

An Assaultron released by Hornwright to squash strikers around the Ash Heap. They are painted red and are equipped with blades engulfed in flames.

An Assaultron that is completely white in color and only encountered within and around the Whitespring Resort. They serve as resort clerks and security, attacking anything that threatens the property. They are normally passive to player characters, but will retaliate if provoked.

Only found at Dyer Chemical during The Universe Conspires for Sofia Daguerre. 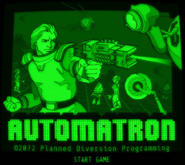