Assaultrons are a type of robot encountered in the Commonwealth in Fallout 4.

The assaultron robot was constructed by RobCo and sold to the US Military as a front-line wartime combatant. It is fast and deadly at close range, and employs a devastating laser at a distance. The dominator variant can enable stealth technology.

The assaultron's body seems to be modeled after that of a female figure. They are highly aggressive, fast, and some will attack the Sole Survivor on sight. The assaultron's face will become surrounded with red electric energy when it is preparing its laser beam attack. The dominator variant is also equipped with a stealth field.

An assaultron's laser can be halted or avoided by using Jet and stepping out of the way, killing it, or doing enough damage to its head. If it is allowed to charge its laser all the way, and if not blocked by an object, it will inflict devastating amounts of damage on its hapless target, often killing even those highly experienced or NPCs in seconds. The fact that assaultrons take reduced damage from headshots only serves to compound their main weapon's threat potential.

They can be very difficult for low level players to face head-on due to their fast speed and powerful attacks. A notable ability they have is being able to sidestep, making them difficult to hit especially with semi-automatic weapons. While their laser is fully charged they are also capable of grabbing an opponent at close range and firing their laser directly into the victim's head, which is a virtually assured death sentence.

Assaultrons' Perception seems to be significantly higher than other enemies', making them difficult to sneak up on and hack without maxed-out Sneak skills, corresponding armor and/or using a Stealth Boy.

Deadly especially for the unprepared, the assaultron is among the most fearsome robotic enemies in the game. While their usual unarmed attacks are already a challenge for some, the real danger from these enemies comes from their charged laser weapons. The laser cannon that doubles as its head can usually disintegrate victims on contact. Making matters worse, dodging the weapon can prove difficult, since the size of the laser engulfs anything in front of it. Luckily the charge up for this weapon is long and given away by an impressive light show coming off the assaultron's face. A fast fighter may be able to kill it quickly or even get behind it while its firing animation is going.

Novatrons are the base Nuka World variation of an assaultron. They can be found in the Galactic Zone in Nuka-World, and more specifically in the RobCo Battlezone.

Assaultrons appear only in Fallout 4. 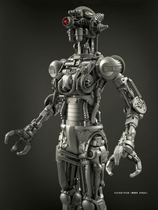 Concept art
Add an image to this gallery

Retrieved from "https://fallout.fandom.com/wiki/Assaultron_(Fallout_4)?oldid=2676152"
Community content is available under CC-BY-SA unless otherwise noted.