Assaultrons are a type of robot encountered in the Commonwealth, on the Island and in Nuka-World in 2287.

The Assaultron was constructed by RobCo Industries and sold to the United States military as a frontline wartime combatant as early as 2072.[1] It is fast and deadly at close range and employs a devastating laser at a distance. Some units can even employ stealth technology.[2] They are quick, nimble and customizable, with a variety of weaponry such as lasers and razor-sharp claws. An Assaultron will not stop until its core is damaged. Even after losing limbs and pieces of machinery, it continues to fight on. Some Assaultrons are equipped with bombs set to detonate if they are destroyed.

In terms of design, the Assaultron is intended for melee combat and durability. To that end, it was designed using proven reliable technologies. The Assaultron is equipped with actuators, chain-powered limbs, and covered in thick armor plating. Modular arms allow for swapping its loadout with weaponry most appropriate for the mission profile. The Assaultron's standard weapon is a combination of claws and blades. Its legs are powered by a combination of hydraulic actuators and springs to allow it to quickly move upon its foes and unleash a devastating melee chain attack. The crown jewel is the head laser, mounted in its center and capable of devastating the opposition when fully charged. For protection, its red lens is surrounded by thick armor plating and distracts enemies from the optical receptors concealed at the top of the head. It has a decent carrying capacity, but well below that of the other designs.[citation needed]

Heavily modified Assaultrons are known to wander the Commonwealth, ranging from those with Protectron heads to better make use of laser weapons to those that replace their legs with a Mister Handy thruster for even more speed and wield dual Shishkebabs in place of claws. There are also secondhand makeshift armor designs that give the Assaultron a fearsome visage. Furthermore, raiders are known to adapt robot armor for their own use, including Assaultron head armor, from which they create Assaultron helmets. As for the heads themselves, some non-functioning units still contain a functioning laser, which those desperate enough to endure the subsequent radiation poisoning can use as a handheld weapon.

The Assaultron's core houses additional servos for the robot's arms and the robots possess great strength in melee combat. They are highly aggressive, fast and most will attack the Sole Survivor on sight, usually using their claw-like hands in melee. An Assaultron's head houses an incredibly powerful laser that requires charging up before being fired. The Assaultron's face will become surrounded by red electric energy when it is charging its laser beam attack, after which a great laser burst will be unleashed, doing serious damage to anything caught in its beam. The Assaultron "dominator" is equipped with a stealth field.

If it is allowed to charge its laser all the way, and if not blocked by an object, it will inflict devastating amounts of damage on its helpless target, often killing even a high-level character or NPCs in seconds. The fact that Assaultrons take reduced damage from headshots only serves to compound their main weapon's threat potential. However, one can cripple the head, thus removing its ability to use its head laser.

Assaultrons' weak points are their legs. However, when these are destroyed, Assaultrons will continue to pursue the target by crawling on the ground. After taking sufficient damage, they will charge a potentially deadly explosion as a last-ditch effort attempt to eliminate the target. Killing them before they can activate it will result in a normal death.

Legendary Assaultrons will invariably detonate violently, similar to a mini nuke blast, approximately two seconds after they are destroyed.

On lower levels, they can be very difficult to face head-on, due to their fast speed and powerful attacks. A low-level player character may have difficulties killing or crippling the Assaultron before it can get into melee range or charge its lethal laser attack, especially if the Assaultron is backed up by additional enemies. One ability they have is being able to sidestep, making them difficult to hit, especially with semi-automatic weapons. While their laser is fully charged they are also capable of grabbing an opponent at close range and firing their laser directly at the victim.

Assaultrons' Perception seems to be significantly higher than other enemies, making them difficult to sneak up on and hack without maxed-out Sneak skills, corresponding armor and/or using a Stealth Boy.

Deadly, especially for the unprepared, the Assaultron is among the most fearsome robotic enemies in the game. While their usual unarmed attacks are already a challenge for some, the real danger from these enemies comes from their charged laser weapons. The laser cannon that doubles as its head can usually disintegrate victims on contact. Making matters worse, dodging the weapon can prove difficult since the size of the laser engulfs anything in front of it. Luckily the charge up for this weapon is long and given away by a large emission of light coming off the Assaultron's face, along with a constant charging sound.

The dominator variant has a powerful attack that consists of stabbing the target's torso with two swords simultaneously and spreading its arms outwards, typically resulting in a one-hit kill against low leveled or low armored player characters. The blades on its arms give its unarmed attacks considerably more power while its head laser will still be aimed at its target. The dominator's true danger is its unique stealth capability, making it difficult to target, especially in V.A.T.S., before it gets into melee range.

The Gunner Assaultron is the same as the basic Assaultron, except it has the Gunners symbol painted on its chest, in place of the star and USA markings. They are frequently found at Gunner bases and outposts.

The Gunner Assaultron invader is the same as the Assaultron invader, except it has the Gunners symbol painted on its chest, in place of the star and USA markings. It is frequently found in Gunners bases and outposts.

Assaultron devils are a modified variant of the Assaultron created by the Rust Devils. It is weaker than the normal variant. Their hands are replaced with construction claws and they are covered in scrap armor.

Assaultron demons are a modified variant of the Assaultron created by the Rust Devils.

Assaultron succubi are a modified variant of the Assaultron created by the Rust Devils. A powerful opponent that usually has a skull mask.

Assaultron hags are a modified variant of the Assaultron created by the Rust Devils. They are equipped with a shishkebab and gamma gun.

Assaultron gorgons are a modified variant of the Assaultron and are created by the Rust Devils. Wielding two shishkebabs, they are the most powerful Assaultron variants of all.

Novatrons are the base Nuka World variation of an Assaultron. They can be found in the Galactic Zone in Nuka-World, and more specifically in the RobCo Battlezone. Additionally, two can be found on pillars guarding the entrance outside. Instead of a claw, a space laser replaces one of the hands.

The Novatron invader is an upgraded version of the Novatron. They can be found in the Galactic Zone in Nuka-World, in the RobCo Battlezone.

The Novatron dominator is an upgraded version of the Novatron, the Nuka-World variation of the Assaultron. They can be found in the Galactic Zone in Nuka-World, in the RobCo Battlezone.

The Novatron initiator is an upgraded version of the Novatron, the Nuka-World variation of the Assaultron. They can be found in the Galactic Zone in Nuka-World, in the RobCo Battlezone.

Assaultrons appear in Fallout 4 and its add-ons Automatron, Far Harbor and Nuka-World. 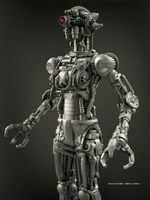 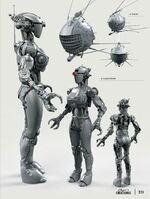 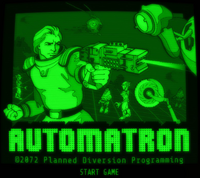