The assault rifle is a ranged weapon in Fallout 76.

Fed from a side-mounted magazine, this assault rifle has anti-aircraft style sights and interchangeable barrels and magazines.[Non-canon 1] It includes a charging handle on the right fashioned out of wood. A common sight in Appalachia, this assault rifle is used by Scorched, Raiders, Settlers, and super mutants.

The assault rifle features a side-mounted magazine and fires 5.56mm rounds. If fitted with an automatic receiver, the rifle switches to using Commando perks instead of Rifleman.

The suppressor mod for the assault rifle contains text which reads "CAL .50", even though the weapon uses 5.56mm.

The assault rifle was one of the first weapons created during the development of Fallout 4, and was originally dubbed "machine gun" before the weapon crafting system was developed. The model filenames still reflect this original title.[Non-canon 1][1] 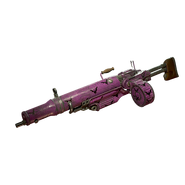 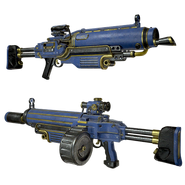