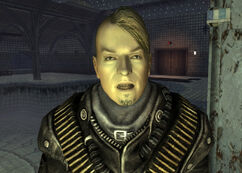 “Let's plan on meeting again as soon as--Wait. Did you hear something? Were you followed?”— Chauncey, moments before being assassinated

The assassin was hired by the White Glove Society society member Mortimer to kill Chauncey at the Ultra-Luxe in 2281.

The assassin is a hired killer on Mortimer's payroll, responsible for protecting the interests of the scheming front desk manager, who in private, intends to return the White Glove Society to cannibalism. He and a few White Glove supporters of Mortimer are under orders from him to stop anyone who is aware of or is in opposition of his goals. One of these people, an insider named Chauncey, along with his detective contact, Jay Barnes (or Crusoe), are targets of Mortimer's associates.

Beyond the Beef: When searching the dead investigator after speaking to Mortimer, you will find a matchbook, indicating a meeting at 4 PM in the steam room section of the Ultra-Luxe bathhouse. After the meeting with Chauncey, the assassin sneaks in and shoots the informant.

This assassin appears only in Fallout: New Vegas.

The assassin can be seen in a small room below the steam room. He can be seen in this room by using the noclip tcl console command for a closer look. He can also be found on the Xbox by going through a wall which is to your right after you enter the room after you cross the corner go straight and you will end up a shady area. You will see a room for a short while because you fall and end back up in the place you started. It is possible to get there too, by somehow making a leap of faith. If you talk to the assassin you will only "look" at him for a split second then going back to normal. This is because the assassin uses an empty voice type. If you kill him, Chauncey also dies. 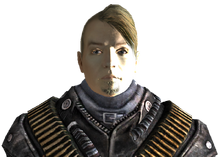 GECK render
Add an image to this gallery
Retrieved from "https://fallout.fandom.com/wiki/Assassin?oldid=3172969"
Community content is available under CC-BY-SA unless otherwise noted.