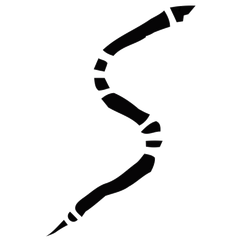 Asp Faust was the leader of the Vipers during the early 2150s. Faust assumed leadership following the death of his father, Jonathan Faust, during the Vipers' initial conflict with the Brotherhood of Steel.[1]

As the "great snakekeeper," high priest, and leader of the Vipers, Asp conducted the group's ceremonies and administrated obligations. To distinguish himself as high priest, Asp wore a snakeskin cape with his bone armor and a snake-skull helmet decorated with feathers.[1]

Asp resided in the Sanctuary tent of The Shrine where he attended to the governmental duties of his people. His mate, the High Priestess of the Great Snake, was always close by.

After his death, the Vipers traveled into the Mojave Wasteland and, by 2281, were reduced to petty raiders due to constant attacks from the Brotherhood of Steel and NCR.[2] Despite their condition, the raiders continued the traditional work and customs of the Vipers.

The Vipers who fled to the east settled in the American southwest and were largely absorbed into Hecate's tribal army, becoming the "Hounds of Hecate."[3]

Asp Faust is mentioned in Fallout and the Fallout Bible.

An asp is a type of venomous viper snake found in southwestern Europe. The term may also refer to asp, the anglicized word for the Greek "aspis" (viper), referring to several venomous snake species found in northern Africa.

Retrieved from "https://fallout.fandom.com/wiki/Asp_Faust?oldid=3231012"
Community content is available under CC-BY-SA unless otherwise noted.