Ashur's power armor is a stylized variant of the T-45d power armor owned by Ashur, the leader of the Pitt raiders.

Through years of misuse, makeshift repairs, scarcity of materials, and constant use, it is a rusty, highly stylized suit of power armor. The left arm of the suit was replaced with the sleeve and glove of the raider iconoclast armor, a brahmin skull substituted for the left pauldron, an icon of a skull strapped to the codpiece, and various bits and pieces of metal were used to patch holes in the structure of it.

The following is a comparison of Ashur's power armor and the tribal power armor.

This suit of armor is only worn by Ashur. He can be looted of it at the end of Free Labor, or by reverse-pickpocketing any well-repaired suit of power armor and taking it from him once he equips the new armor. It can also be taken without repercussions toward Pitt raiders by hacking the Mk V turret's control terminal, with 75 Science required. 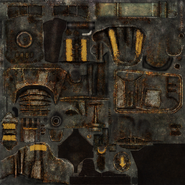