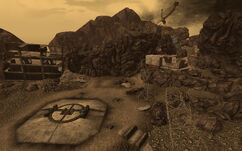 The Ashton silo control station is a location in the Divide in 2281.

A small ruined building overlooking a silo door, with access to the launch control console and the Ashton missile silo. The console can be unlocked by ED-E, allowing the Courier to fire the missile still inside it. The missile must be fired to complete the quest The Launch.

Ashton missile being launched
Add a photo to this gallery
Retrieved from "https://fallout.fandom.com/wiki/Ashton_silo_control_station?oldid=3309196"
Community content is available under CC-BY-SA unless otherwise noted.