The Ashton missile silo is a location in the Divide in 2281.

The Ashton facility is primarily located underground, built prior to the Great War. The missile silo stored nuclear missiles in preparation for launch by way of the Ashton silo control station.

When first entering the silo, a long wide room leads to an open transport lift. Several tunnelers appear further on. To progress, a lift must be activated. The lift leads down to the lower level of the silo. Tunnelers wander the path. The lift area appears only once. Subsequent entry to the silo from the outside leads directly to the following room. The lift exits into a small control room with a desk and computer equipment. There is a stairway to the left that leads downwards, and two doors ahead and to the right. The door straight ahead leads into the level 1 corridor, while the righthand door leads to the level 1 launch deck.

Following the catwalk around the level 1 launch deck leads to a room accessible only by hacking the Hard locked terminal next to the blast door. Past the room is another door that leads back to the corridor noted above. Off the corridor is a locked office, unlockable via the Average locked terminal next to it, and a medical room guarded by a sentry bot. Within the medical room are an Auto-Doc and a commissary terminal.

From the control room, going down the staircase leads to the level 2 launch deck catwalk, with an Average locked storeroom and a staircase that leads down to the remains of level 3. The left of the blast crater by the launched missile leads to more tunnelers before the silo exit to Sunstone Tower roof.

Sometimes, the Auto-Doc will not cure addictions. 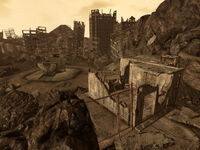 To the right the silo's entrance

Another eyebot upgrade circuit board