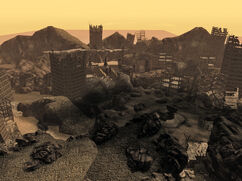 “At the end of the High Road lies Ashton.”— Ulysses

Main article: Background of the Divide

Along with its neighbor Hopeville, Ashton was home to several United States Armed Forces nuclear missile bases and silos. In 2077, along with the rest of the world, it burned in nuclear fire. Although the Ashton area was a major part of the ballistic defense matrix, the missiles raining down on the city must have caught the soldiers there by surprise, as the ICBMs never left their silos.

Close to two centuries later, a small survivalist community emerged near the ruins of Ashton and Hopeville. Though small at first, the willingness of a single Courier to travel the hard road to and from the community [1] Named the Divide, it was a community of hardy folk, building a new future using the Old World as foundation.[2] It was a new nation, slowly stirring to life, forging new ideals to apply to the new world they were placed in.[3]

The success of the community eventually drew the attention of the New California Republic, who began to annex it swiftly for a newly established supply line across the treacherous Divide into the Mojave Wasteland. This drew the attention of Caesar's Legion, which attempted to cut the new supply line. This war did not destroy the settlement, however. It was the work of the Courier who, returning to the Divide again, carried a package from Navarro by order of the NCR. This package[4] containing the activated ICBM launch codes,[4][5] and when the package was close enough it sent a signal to the dormant nuclear missiles, causing them to begin detonating one after another, splitting the earth, cracking and twisting the landscape, and causing massive earthquakes. This turned Ashton into what it is now.

Ashton is now a wreck of the skeletons of buildings and camps of marked men who have survived the brutality of the Divide. Many ruined elevated highways have collapsed and numerous cars litter the area.

Ashton is located in the same geographical area as the real world Ashton, Nevada, a ghost town in the Amargosa Valley of Nye County, Nevada.

Retrieved from "https://fallout.fandom.com/wiki/Ashton?oldid=3362285"
Community content is available under CC-BY-SA unless otherwise noted.