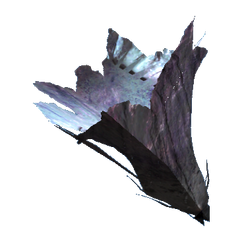 An ash blossom is a consumable item in Fallout 4.

An ash blossom is the flower of a Commonwealth plant that grows almost exclusively in heavily irradiated bodies of water. This plant is nearly identical to the melon blossom plant found elsewhere in the Commonwealth, but with ash-colored vines and ash-purple flowers.

Statistically, ash blossoms are identical to melon blossoms, providing the exact same health restoration and radiation penalty. However, ash blossoms are the only plant which grows within the irradiated expanse of the Glowing Sea, and thus are the only viable food option available to the Sole Survivor if they run low on other provisions.

In Survival mode, it is used to craft herbal antimicrobial and herbal stimulant.

Ash blossoms cannot be purchased or looted from NPCs or containers, and can only be obtained from one source, the plant itself. A total of 99 ash blossom plants can be found throughout the Commonwealth.

Retrieved from "https://fallout.fandom.com/wiki/Ash_blossom?oldid=3293376"
Community content is available under CC-BY-SA unless otherwise noted.