The Ash Heap is one of the six regions of Appalachia.

The Mount Blair region was the location of a large-scale coal mining operation before the Great War.[1] Two different families, the Garrahans and Hornwrights, established businesses here, subsequently overlooking the mining operations from Bramwell.[2] As part of this industry, large machines such as the Rockhound were used to remove large parts of the mountain at once.[1] This mining operation caused the air quality of surrounding cities such as Lewisburg to deteriorate, prompting leadership to release public service announcements instructing citizens to wear gas masks during inclement weather.[3] Clear Skies Alliance and Hornwright Industrial were developing air purifiers to cleanse the air around Mount Blair.[4][5]

After the Great War, survivors began to refer to this region the "Ash Heap" due to its harsh environment. A thick layer of filthy smoke and cinders that blankets the area constantly bellow up from the mines, containing several toxins, which results in individuals inhabiting or traveling through necessitating protective breathing equipment. Survivors believe this is caused by fires in the tunnels below, raging unceasingly for some unknown reason.[6][7][8][9] Despite this, the mines underneath the region still hold riches.[10]

Around 2103, the Blue Ridge Caravan Company established an outpost at the western exit of the Big Bend Tunnel, using the tunnel to cross underneath the Savage Divide to the Cranberry Bog. The Blood Eagles have a strong presence in the Ash Heap, having settled into and repurposed many old campsites across the region, such as the Rollins labor camp or the Sludge Works.

The environment of the Ash Heap is dangerous compared to other regions of Appalachia. Toxic air might suffocate the player and for this reason is advised to equip a gas masks or similar to null the effects.[11]

Weather occurring in the Ash Heap is primarily overcast, caused by the polluted smog covering the area. The weather has a 40% chance to be overcast, 40% to be misty, 11% to be an ash storm, 7% to be rainy, and 2% to be a radstorm.[12] Ash storms are a type of weather unique to the region, primarily occurring near Mount Blair.[13] Vegetation is less common in the environment of the Ash Heap, but includes unique flora such as the ash rose as well as blight caps, firecracker berries, silt bean plants, and starlight berries. All lakes and ponds in the region have toxic water, with only two having dirty water instead; Lake Reynolds and the small lake in the Sludge Works.

The Ash Heap is located in the southwest corner of the map, bordered by the Forest to the north and the Savage Divide to the east. The Rockhound sits atop Mount Blair, at the western-central area, northeast of the township of Welch, and mostly surrounded by railroad system. The other two towns, Beckley and Lewisburg, are to the west and east of the mountain respectively. Three main state routes cross through the Ash Heap, including Route 81 running parallel with the Ohio River to the west, and Routes 83 and 84 traversing the center.

The Blue Ridge Caravan Company has an outpost at the Big Bend Tunnel East on the eastern reaches of the region. The Blood Eagles have repurposed many old campsites across the region, and can be easily found between Welch and Lewisburg.

The Ash Heap is in the southwestern portion of the Appalachia map and contains the following locations:

“The Ash Heap is the center of mining in this part of Appalachia. The air wasn’t the cleanest here before the bombs dropped, and now with mountains of ash mixing in with the nuclear fallout, you have a virulent and choking atmosphere where a gas mask (or other protective measures) is a must. While maintaining a backup breathing apparatus is a good idea, this region cannot be described as “oxygen-friendly.” There are great gouts of smoke you should steer well clear of, especially as you head inevitably to the main landmark: the gigantic bucket-wheel excavator sitting on what’s left of Mount Blair. You don’t want to be gasping for breath on top of the local risk of attacks from the mysterious Mole Miners or the threat of an encroaching Rad Storm. There are some hard-scrapping old mining towns, like Beckley and Lewisburg, to visit and scavenge and a special suit of Power Armor to obtain, if your questing takes you to the headquarters of Garrahan Mining, owned by one of the prominent mining families in this region. The vertical tower mansions to the southeast still exist to this day. Expect periodic bouts of seismic activity and instability, mainly brought about by decades of incautious mining by the AMS Corporation. AMS conducted some early Ultracite tests in the region, leading to seismic rumblings, while other shaking seems to be caused by Scorchbeasts burrowing and the infamous “Motherlode.” Prior to the bombs dropping, an earthquake revealed a vein of Ultracite under some homes in the impoverished town of Welch. AMS attempted to evict the residents in order to reach the vein, and these tactics resulted in a riot, which swept the region about three weeks before the War. Rioters hit the Bucket Wheel Excavator on Mount Blair, blowing up one of the Mega Mansions and defacing the home of the Hornwrights. The Garrahan family’s holdings were mainly left intact due to their tendency to work with, rather than against, the miners.”— Fallout 76 Vault Dweller's Survival Guide
“Smoke and cinders constantly bellow up from the mines in the Ash Heap. Survivors believed this was caused by fires in the tunnels below, raging unceasingly for some unknown reason. As the winds blow and the wind changes, it is common for thick layers of filthy smoke to blanket the area, providing cover for friend and foe alike. But there are reasons to venture into this choking nightmare; the mines deep within Appalachia’s mountains still hold riches for those brave enough to venture below....Top of the Heap, Mount Blair, was a large-scale coal mining site before the War, where gigantic digging machines removed entire portions of the mountaintop at once. The Garrahans and Hornwrights were the two major families in charge of Appalachia’s mining industry. They owned lavish estates in the mountains overlooking their precious mines.”— Fallout 76 Vault Dweller's Survival Guide

Edwin's gang is headquartered somewhere in the region.[14]

The Ash Heap appears only in Fallout 76. 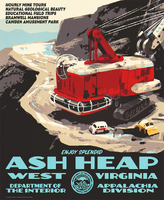 A sunrise in the Ash Heap

An early version of Mount Blair with clear weather

Another early version of Mount Blair with clear weather