“But then one of my R&D gurus took a good look at the plans and said that the scrubbers could be repurposed. Instead of scrubbing the air, the tech could be used to ionize particles and convert them into usable minerals - perhaps even aerosolize minerals from our mines and collect them automatically! Marketing even came up with a snappy name: "Ash Forges." Perfect. We'll have to keep this quiet though. If the Clear Skies Alliance finds out about this, they're likely to try and slap an injunction on Hornwright to get their plans back.”— CEO Daniel Hornwright's personal entry 3

The Ash Forges are world objects in Fallout 76.

Ash Forges were designed using technology from the Clear Skies Alliance originally meant help purify the air and lessen the environmental damage done by the Appalachian mining efforts, such as the Rockhound installed atop Mount Blair which polluted the southern region of Appalachia by filling the air with soot and ash from the strip-mining the mountaintop. The Clear Skies Alliance approached Hornwright Industrial to partner in an endeavor to remove harmful particles from the air and improve health and living conditions.[1]

Daniel Hornwright, the Hornwright CEO, accepted the offer only when his daughter and Senior Operations Executive, Penelope Hornwright, discovered the air purifiers could instead be used to pull heavy metals out of the air by ionizing particles and convert them into usable minerals. The marketing department dubbed these altered machines "Ash Forges." [2][3]

Though the machines were built across the Ash Heap, implementation of the Ash Forges was ultimately delayed by Dominick Heyward after he discovered the alternative plans for the air purifiers.[4]

Correspondence from Dominick to Penelope indicates that Hornwright Industrial capitalized on the ability to gather aerosolized minerals by setting fire to old, toxic mines and further contaminating the air around Mount Blair. [5]

The unimplemented quest Old Flames would have had the Residents activate the forge, deposit "precursors" at target burn sites, and then harvest the raw materials from the air. The quest was ultimately cut, but the Forges and several terminals referencing their alterations from simple air purifiers were left in game.

The Forges appear as tall, cylindrical fans. At the base of the fan is a terminal which the player can interact with; however the terminal cannot be used to activate the Forge.

The original plan intended for players to crack Heyward's locked terminal, gaining access to the ash forge system, and activating the Old Flames quest, during which they'd be required to activate the forge, deposit "precursors" at target burn sites, and then harvest the raw materials from the air. The quest was ultimately cut, but the forges were left in the game as one of several examples of Hornwright crimes against reason and the environment.

The Ash Forges are grouped into 4 sites, arranged around Mount Blair in a clockwise fashion. 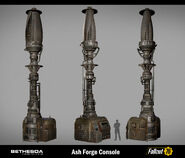 Concept art by Alex Burback
Add an image to this gallery

Retrieved from "https://fallout.fandom.com/wiki/Ash_Forge?oldid=3119548"
Community content is available under CC-BY-SA unless otherwise noted.