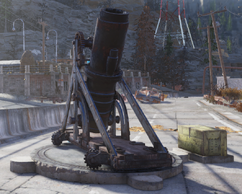 The artillery piece is a settlement object in Fallout 76. It can be built at a C.A.M.P. once the plans have been acquired. These can be acquired by finding the plans in Fort Defiance, or by purchasing the plans from a robot vendor, and then constructing them.

The artillery piece functions nearly identically to Fallout 4's, with the additional requirement of power (3) in place of a settler. Once per day the box beside the artillery piece will generate 10 artillery smoke grenades, that can be used within a certain range of the placed artillery.

Once thrown, an artillery smoke grenade will generate a tower of blue smoke, upon which the artillery piece will then take about 15-20 seconds to fire 5 mortar shells at the target area. The points hit randomized and around the designated bombardment area, but rarely impact where the flare is placed.

Anything within the blast radius will take damage. Inside a house, damage is decreased. Inside of a C.A.M.P, if the player hasn't checked Passive mode, the shell deals full damage, easily destroying walls and anything inside.

After firing, it will take 15 minutes for the artillery piece to reload and will generate multiple times a day; any flares thrown during this time will only inform the player character the piece is loading, and will subsequently waste the thrown flare.

The range of artillery shells has been greatly reduced from Fallout 4. The current range is 300 meters, or 1500ft. in 360° in all directions.[verification overdue]

Retrieved from "https://fallout.fandom.com/wiki/Artillery_piece_(Fallout_76)?oldid=3269630"
Community content is available under CC-BY-SA unless otherwise noted.