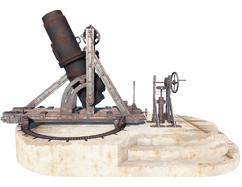 Old Guns
With Our Powers Combined

The artillery piece is a constructible settlement object featured in Fallout 4.

The artillery piece is a mortar that consecutively fires highly-damaging shells with a high level of precision and accuracy. Each piece of artillery will fire five shells, so building multiple mortars will increase the amount of shells fired from one settlement. Its ammunition is unlimited, and its maximum range is approximately a five sector radius, as viewed on the Pip-Boy's world map. It becomes active only after a settler is assigned to operate it.

Artillery strikes are called down by throwing an artillery smoke grenade into a target area that is within range of active artillery. Fire mission progress may be monitored on Radio Freedom.

If multiple settlements with active artillery are within range of a target, all of them may engage, significantly increasing the number of shells striking the target. After a strike, there is a delay of approximately three minutes before another strike can be initiated.

Originally, there were two artillery pieces. The laser cannon, which can be seen in the concept art, never made it into the game. 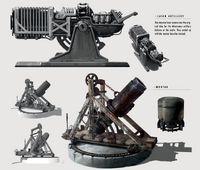 Minuteman operating the artillery piece
Add a photo to this gallery
Retrieved from "https://fallout.fandom.com/wiki/Artillery_piece_(Fallout_4)?oldid=3294254"
Community content is available under CC-BY-SA unless otherwise noted.
... more about "Artillery piece (Fallout 4)"
RDF feed
Has platform
Playstation 4 +, Xbox One +  and PC +