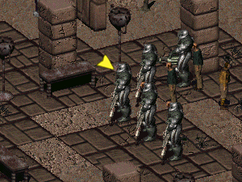 Arthur, the man leading the squad

King Arthur Pendragon is the leader of the last great squad of Paladins in 2241.

Born to a father by the name of Uther, Arthur has been with the Brotherhood searching for the Holy Hand Grenade for a long time.

If the Chosen One encounters Arthur and his squad, he can be pointed in the direction of Antioch for $309. He can also ask for the location of a GECK (even though they have two, they are not going to let him beat the game that easily) and they will point him in a similar direction and run off.

Arthur Pendragon appears only in Fallout 2.

Arthur Pendragon is a direct reference to the legendary figure King Arthur, son of Uther Pendragon, who was a popular figure in British tales and folklore during the Middle Ages. The Holy Hand Grenade of Antioch is a specific reference to the well-known British comedy film Monty Python and the Holy Grail, which is itself a parody of the popular legend of King Arthur.

Retrieved from "https://fallout.fandom.com/wiki/Arthur_Pendragon?oldid=2342364"
Community content is available under CC-BY-SA unless otherwise noted.