Supreme Commander of the East Coast Brotherhood of Steel 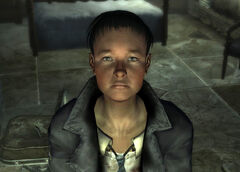 “Look around you, Danse. Look at the scorched earth and the bones that litter the wasteland. Millions... perhaps even billions, died because science outpaced man's restraint! They called it a "new frontier" and "pushing the envelope," completely disregarding the repercussions. Can't you see the same thing is happening again?”

Elder Arthur Maxson (Brotherhood registration MX-001E) is the last descendant of the Maxson lineage. He served as a squire in the Citadel in 2277 and is currently the supreme commander[1] of the East Coast chapter of the Brotherhood in 2287.

Born in 2267 to Jonathan and Jessica Maxson, Arthur is a descendant of the legendary Roger Maxson, founder of the Brotherhood of Steel. His father, a high-ranking paladin serving just outside the New California Republic, was recently killed in battle, and his mother, Lady Maxson, sent the boy east to be raised under the tutelage of the then respected Elder Owyn Lyons.[2] Squire Maxson tends toward timidity, which is the main reason his mother sent him to the Citadel.[3] Part of the reason were internal conflicts in the Brotherhood out west, which created an unsafe environment for Arthur. Ironically, the Citadel was the safer option.[4]

Ever since arriving at the Citadel, Arthur was an attentive student, with a good knowledge of the Brotherhood's triumphs and history.[5] He has also proven himself to be a keen observer, making accurate observations of the local super mutant threat and even observing a behemoth from the Citadel walls once.[6] Overall, he received a top notch education, thanks to excellent teachers and trainers at the Citadel.[7] Of course, he learned the Codex by heart, though the protocols gave him particular trouble[7], especially when it came to encounters with outsiders. The Codex deemed them untrustworthy, yet Elder Owyn Lyons was content to violate them as he saw fit, such as when accepting the Lone Wanderer into the Citadel without taking the Oath of Fraternity. For a boy whose only real encounters with outsiders were Brotherhood members visiting the Citadel,[8] he was surprised by the decision, but deferred to Elder Lyons' judgement, despite his reservations.[9][10][11][12] He was also trained in combat by Sentinel Sarah Lyons, who on one occasion showed him how to kill people by stabbing them in the kidneys.[13]

The single largest problem the young Maxson faced were expectations: As the last of the Maxson line, he was expected to become the Brotherhood's messiah, with a, quote; "soul was forged from eternal steel." Like any other child burdened with such responsibility, he vehemently denied these claims, easy to do ever since the elders in the West lost faith in Lyons' ability to lead.[2]

Loneliness also weighed heavily on the young Maxson. As the only child at the Citadel, he grew up surrounded by adults, with no one of equal age to spend time with. Given that everyone he worked with was a soldier, he didn't receive kindness or warmth, merely schooling and training.[14] His closest friend was Liberty Prime, an inanimate robot. Scribe Rothchild banned him from the laboratory, emphasizing the futility of trying to make friends with a machine.[15] He had to sneak into the Lyons Den to read Paladin Vargas' copy of Guns and Bullets without his knowledge (he wouldn't give it to him otherwise).[16]

As a result, the ten-year-old Arthur had a timid and reserved demeanor. It wasn't helped by the fact that the young boy was barred from patrols due to accidentally shooting Sentinel Lyons during one outing.[17] Arthur's reservations and apprehension helped him maintain a level of politeness and decency that would later translate into unmatched charisma.[18][19][20][7][8]

The key change in Arthur Maxson's life came with adolescence and the death of Elders Owyn Lyons and Sarah Lyons. While the crumbling Lyons' Brotherhood of Steel chafed under the ineffectual leadership of one elder after another, Maxson rapidly developed his talents, the potential inside awakening. In 2279, at the age of 12, he managed to kill two raiders on a training patrol, saving the squad that was supposed to escort him. A year later, he managed to single-handedly kill a deathclaw, taking grave wounds in the process and a disfiguring scar that marred his face forever. His key achievement came in 2282, at the age of 15, when he killed the super mutant called Shepherd, who tried to reorganize the remnants of the Capital Wasteland super mutant infestation. This achievement has revealed another secret: The West Coast elders were still monitoring their errant brethren. With Maxson's achievement came leadership and promotion to a provisional elder.[21]

As of 2287, Elder Maxson's reign in the Capital Wasteland was uncontested, and his authority and influence were spreading across the Eastern Seaboard. The Prydwen was a key element of the Brotherhood's power projection, rallying people to his cause. In addition, Maxson had the full support of the elders back on the West Coast, who have proudly reported that they've begun uprooting and eradicating cults that have popped up, worshipping Maxson as though he's some kind of god.[23] Maxson himself is almost offended by the idea of being referred to as a deity, as it goes against everything he believes in. Arthur Maxson is happy to be one thing: the perfect human specimen, an example of everything a human being can achieve. Assisted, even enhanced, by advanced technology, but still very much human.[21]

His authority is reinforced by his accomplishments, growing the Brotherhood in the East from a moribund group of complacent stragglers occupying a single Citadel into a major military force capable of projecting power along the Eastern Seaboard. Thanks to his tenacity and singular vision,[24] the men that serve under his command do so with pride[25] and unmatched loyalty, ready to invade hell itself.[26]

Arthur Maxson, for all his maturity, is still a young and idealistic yet capable leader of the Brotherhood on the East Coast. He has established an amalgam between the ways of his predecessor and tutor Elder Owyn Lyons, who was using technology to help others and the traditional Brotherhood approach of coveting and preserving advanced technology to protect people from abusing it. As a result, he is much more lenient about technology being in the hands of outsiders, and allocates teams of soldiers to combat dangers that would otherwise harm or kill the people of the wasteland,[27] while he has other teams scouring the ruins for technology that could be misused in the wrong hands. Maxson also strongly insists that the Brotherhood has the best interests of the Commonwealth in mind.

He deeply cares for everyone under his command, as he was exceptionally reluctant to allow Ingram into the field as a field scribe despite Knight-Captain Cade's professional opinion that due to her power armor frame (which replaced her legs and much of her lower torso), she was more suited for combat than scribe-work, in fact probably better suited than any knight they could muster.[28] Additionally, he explicitly ordered that all technology was to be traded for food and medicine, and violent confrontation was to be a last resort, which drastically sets him apart from the West Coast Brotherhood, who used violence as a first resort. This shows that not only does he not wish to risk the lives of those under his command, but he does genuinely seem to care about the people of the Commonwealth.

He also approved a request by Senior Scribe Neriah to develop a more effective alternative to the pre-War RadAway, showing that he has also carried on Lyons' efforts of improving technology as opposed to simply hoarding it, which remains the West Coast's goal, as can be seen through a conversation between Nolan McNamara and Veronica Santangelo in Fallout: New Vegas.

He can usually be found in the Citadel B ring, where his room (and personal terminal) is located.

Maxson, along with the Prydwen, will show up in the Commonwealth once the quest Reunions is completed. He can usually be found in the main command deck of the Prydwen, and may also go to his room.

He will join the Brotherhood attack on the Institute during the quest Ad Victoriam, and become a temporary follower in The Nuclear Option.

If, however, the player character decides to side with the Institute, then during the quest Airship Down he will arrive from The Prydwen in a Vertibird, in his personal elder power armor wielding his unique Gatling laser.

In the Railroad main quests, he is largely mentioned only until Rockets' Red Glare, where he can be confronted while or after sabotaging the Prydwen. He will be carrying his unique battlecoat and Gatling laser, but not his power armor.

If the Commonwealth Minutemen destroy the Prydwen during the quest With Our Powers Combined, he will not be present during the Brotherhood's retaliation on The Castle, indicating that he dies in the Prydwen's explosion.

If the Brotherhood is victorious, then Maxson will advise that, as the Sole Survivor holds the rank of sentinel, while they are free to carry out their own missions, to keep the Brotherhood's interests as a whole at heart.

Arthur Maxson's rise to power has some similarities with the legend of King Arthur. After his father Uther Pendragon's demise, the fifteen-year-old Arthur became the new King of Britain and fought a series of battles, culminating in the Battle of Bath. Arthur is victorious against the Picts and Scots and subsequently establishes an empire. Similarly, sometime after Sarah Lyons' demise, Arthur Maxson fights a series of battles at age fifteen against the super mutants, eventually leading to his battle against the super mutant Shephard who was attempting to unite the super mutants of the Capital Wasteland. His victories lead to his ascension as the elder of the eastern chapter and establishing Brotherhood territory on the east coast.

Retrieved from "https://fallout.fandom.com/wiki/Arthur_Maxson?oldid=3289575"
Community content is available under CC-BY-SA unless otherwise noted.