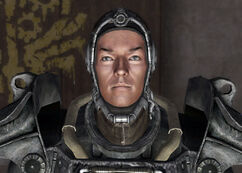 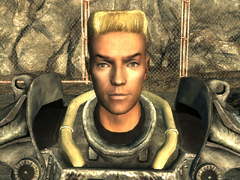 Artemis without his helmet

Knight Artemis is a Brotherhood of Steel member who resides in the Citadel in 2277.

One of Lyons' finest soldiers, Knight Artemis has repeatedly proven himself in the combat zone. He's currently resting up after a scouting mission in which he supported his brothers over at GNR building plaza sweeping the area for super mutants. It's a job he enjoys as much as mentoring the initiates. He is a real backbone of the Brotherhood.[1]

Artemis wonders whether his decision to not join the Brotherhood Outcasts was a wise one to make. He claims to have killed more super mutants than every member of the Lyons' Pride combined.

Knight Artemis appears only in Fallout 3.

Retrieved from "https://fallout.fandom.com/wiki/Artemis_(Fallout_3)?oldid=3326536"
Community content is available under CC-BY-SA unless otherwise noted.