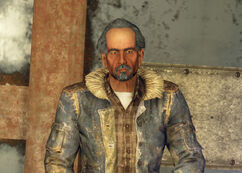 Art Knapp is a farmer in Appalachia in 2103. He is visiting Fort Atlas to request an exchange with the Brotherhood of Steel, trading his crops for protection.

Art is a local farmer whose family has been living off the land for generations. He claimed a small patch of land[1] as humans began to return to Appalachia;[2] however, his farm is being plagued by thieving Crater Raiders.[3] After hearing that the Brotherhood First Expeditionary Force had set up at Fort Atlas, Art arrived at their base to try and trade some of his exta crops for protection. Previously, Art heard stories of Taggerdy's Brotherhood "taking things from folks" for the cause, so he wants to make sure that he does not suffer the same fate as those who had their livelihood taken by the Brotherhood. If this new Brotherhood was "on our side," as they claim to be, he sees it as only fair that they would protect local farmers.[4]

Art Knapp appears only in Fallout 76, introduced in the Steel Dawn update.

Retrieved from "https://fallout.fandom.com/wiki/Art_Knapp?oldid=3429609"
Community content is available under CC-BY-SA unless otherwise noted.