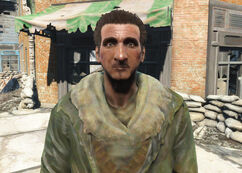 Art is a wastelander living in the Commonwealth in 2287.

Not much is known about his life, except for the fact he has kids. It is also around this time that a synth version of Art is seeking to replace him.

He is part of a random encounter, where he will be found holding his counterpart at gunpoint, or being held at gunpoint by his counterpart. If he survives the encounter, he will only repeat one of several lines of dialogue. Even if the Sole Survivor does kill his synth version, a new version of it may be spotted later in the game.

If one chooses to let human Art kill his synth counterpart, he will travel to Bunker Hill and remain there. [citation needed]

Aside from Shaun, Art appears to be the only living person with a synth counterpart, as the Institute normally kills and disposes of those they replace with synths.

Retrieved from "https://fallout.fandom.com/wiki/Art_(human)?oldid=3290174"
Community content is available under CC-BY-SA unless otherwise noted.