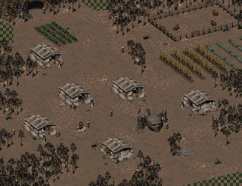 Finish Temple of Trials
Find Vic the Trader
Kill the evil plants that infest Hakunin's garden
Retrieve the GECK for Arroyo
Obtain flint to have Mynoc sharpen your spear
Rescue Nagor's dog, Smoke, from the wilds
Fix the well for Feargus

The Arroyo village is a settlement and a fragment of Arroyo.

The village consists of many tents in which villagers and warriors live. There are crops in the east, a brahmin field in the northeast and the well and the head of the Vault Dweller are in the center of the district.

Lucas and Jordan can teach the arts of fighting with fists and spear.

Here the Elder leads the village, but she hopes to get a very powerful artifact to save the villiage, as it suffers from famine, poverty, disease, and drought. Vic the trader may know something about it, though he needs to be found first.

Hakunin, the village shaman, has a plant problem in his garden. The plants need to be weeded - permanently.

Feargus, the Chosen One's nephew wants the well fixed. It's a problem, at least to him.

Aunt Morlis is in possession of a flint - a stone that can be used to sharpen some spears.

The Arroyo village appears only in Fallout 2.

Retrieved from "https://fallout.fandom.com/wiki/Arroyo_village?oldid=3155721"
Community content is available under CC-BY-SA unless otherwise noted.