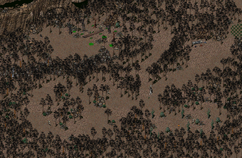 The Arroyo hunting grounds are a small area in Fallout 2.

They lie to the northwest of Arroyo, the Chosen One's starting point and hometown. They are the hunting fields for the people of Arroyo, indicating that their major source of food - apart from vegetables grown in the village gardens - is a wild herd of geckos.

The hunting grounds are also a good area to search for healing powder ingredients, namely broc flowers and xander root. There are about 1-3 samples of these ingredients.

Nagor wants the Chosen One to find Smoke, a dog and rescue him. Smoke can be found beyond a small patch of toxic waste in the north-west.

Retrieved from "https://fallout.fandom.com/wiki/Arroyo_hunting_grounds?oldid=3105484"
Community content is available under CC-BY-SA unless otherwise noted.